“Revaty” is the name given to the #500 series trains that Tobu Railway introduced along popular tourist routes in April 2017. The Revaty’s sleek design, “champagne beige” exterior, and comfortable interior have made it very popular with both train enthusiasts and travelers. 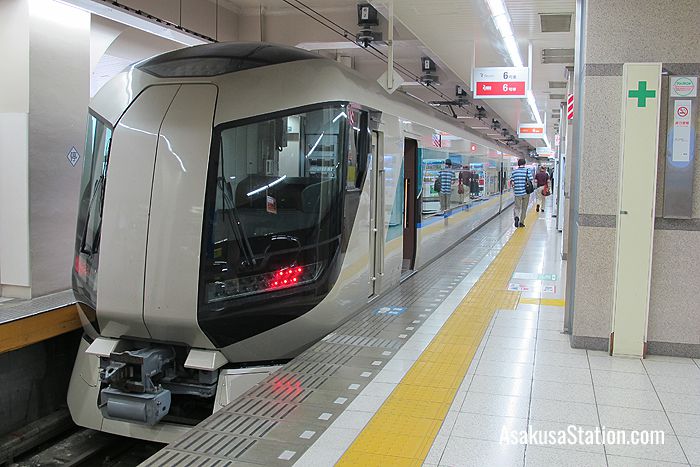 This train’s chief characteristic is that it can be coupled together with other Revaty services or separated en route. This coupling capability has enabled Tobu to increase the number of services to popular destinations such as Nikko and Kinugawa Onsen, and also means that passengers can now travel directly from Asakusa in Tokyo to the Aizu region in northern Japan, without having to change trains on the way.

There are also two #500 series commuter train services that run from Tobu Asakusa Station which you can read about in our articles on the Urban Park Liner and the Skytree Liner.

Limited Express Revaty trains make seven daily departures from Tobu Asakusa Station on weekdays and eight on weekends and holidays. There are six return trains on weekdays and seven on weekends and holidays. However, because of the Revaty’s coupling and decoupling capability the number of routes served is actually greater than that. At Tobu Asakusa Station Revaty services depart from platforms 3 and 4.

There are four separate Revaty services:

Revaty Kegon is the most frequent service and the “Ryomo”, “Kinu” and “Aizu” services are all coupled with Revaty Kegon services at some point along their routes. In this article we will look at each of these services in turn.

As Tobu Railway is a private company none of these services are covered by the Japan Rail Pass. 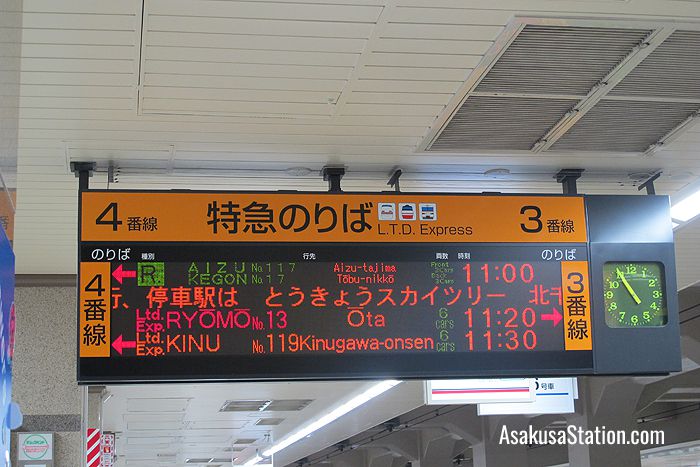 Most Revaty Kegon services run between Tobu Asakusa Station and Tobu Nikko Station stopping at the following stations on the way. Not all services stop at Tobu-Dobutsuen-Koen, Itakura-Toyodai-mae or Shin-Tochigi stations.

Revaty Kegon #1, #11, #17, and #29 are all coupled with Revaty Aizu services between Tobu Asakusa and Shimo-Imaichi stations. At Shimo-Imaichi Station the trains are decoupled and then follow separate routes.

Revaty Kegon #47 is coupled with Revaty Ryomo #43 between Tobu Asakusa Station and Tobu-Dobutsuen-Koen Station where the two trains are decoupled and then follow separate routes.

Revaty Kegon #14 is coupled with Revaty Kinu #114 at Shimo-Imaichi Station before proceeding on to Tobu Asakusa Station.

Revaty Kegon #28, #32, #40 and #48 are all coupled with Revaty Aizu services at Shimo-Imaichi Station before proceeding on to Tobu Asakusa Station.

The chief destination for this route is Tobu Nikko Station which serves the popular tourist destination of Nikko. Nikko has many famous shrines and temples, but chief among these is the Toshogu, a beautifully decorated shrine built around the tomb of the shogun Tokugawa Ieyasu who died in 1616. Nikko is also famous for its hot springs, its wild monkeys, and for the sacred Shinkyo Bridge which is part of the Futarasan Shrine and considered to be one of the most beautiful bridges in Japan. It takes around 1 hour and 53 minutes to reach Tobu Nikko Station from Asakusa and the full fare is 2,800 yen. 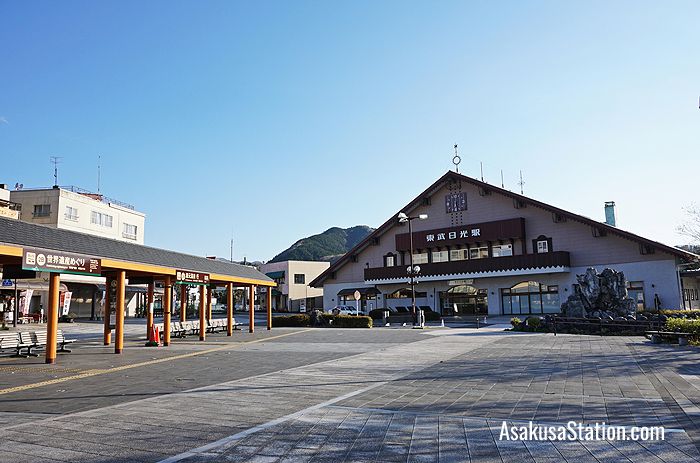 Other limited express services that run between Tobu Asakusa and Tobu Nikko stations are the Spacia Kegon which is the fastest service and the Kirifuri which only runs on weekends and holidays but is the cheapest service available.

There is only one Revaty Ryomo service (#43) and this is an outbound service that runs from Tobu Asakusa Station to Tatebayashi Station in Gunma Prefecture. This train is coupled with Revaty Kegon #47 between Tobu Asakusa Station and Tobu-Dobutsuen-Koen Station. The two trains are then decoupled and follow different routes. The Revaty Ryomo stops at the following stations on its route:

The chief destination on this route is Tatebayashi Station. Tatebayashi’s attractions include the azalea park at Tsutsujigaoka Koen, the large flower park at Tobu Treasure Garden, Gunma Museum of Art, and Morinji Temple which is known as the setting of a famous folktale about a magical raccoon-dog. It takes 1 hour and 12 minutes to reach Tatebayashi from Asakusa and the full fare is 2,120 yen.

For alternative services on this route see our article on the Limited Express Ryomo.

There is only one Revaty Kinu Service (#114) and this is an inbound service that runs from Shin-Fujiwara Station in Tochigi Prefecture to Tobu Asakusa Station. This train runs independently until it reaches Shimo-Imaichi Station where it is coupled with Revaty Kegon #14. The two services then continue on together to Tobu Asakusa Station. The Revaty Kinu  stops at the following stations on its route:

This train provides a useful additional return service from the popular spa resort of Kinugawa Onsen back to Asakusa in Tokyo. The journey from Kinugawa Onsen to Asakusa takes 2 hours and 11 minutes for a full fare of 2,990 yen. For outbound services to this resort passengers can use the Revaty Aizu (see below) or the Spacia Kinu.

There are a number of key destinations on this route as it services both the Kinugawa Onsen hot-spring resort area and the Aizu region of northern Japan. Example journey times and full rail fares (including limited express surcharges) are given below.

Kinugawa Onsen is a hot spring resort town with many traditional hotels. Boat trips on the River Kinu can be taken from April till November and there is a hiking trail through the nearby scenic Ryuokyo Gorge. The nearby Edo Wonderland amusement park is a 15 minute bus ride from the station.

Ryuoukyo means “Dragon King Valley” and is the name of a scenic ravine which is in walking distance from Ryuoukyo Station. The ravine is popular with hikers and is known for its spectacular views particularly in the autumn foliage season.

Kawaji Onsen is a scenic hot spring resort town on the Kinugawa River with many open air baths on the banks of the river. The mineral waters here are said to have many health benefits and be particularly good for easing muscle ache and the pain of rheumatism and neuralgia.

Yunishigawa Onsen is a hot spring resort town which also has open air baths, as well as traditional thatched-roof houses, and it is well known for its local rustic cuisine which includes wild boar and venison cooked in a sunken hearth.

Nakamiyori Onsen is a small hot spring resort with hot spring bathing, dining, camping and barbecue facilities. Overnight cabins are also available to rent which all have their own mini-kitchens and free Wi-Fi.

Aizu Tajima itself is not a major tourist destination, but from here passengers can take a connecting relay train service to Aizu Wakamatsu. Aizu Wakamatsu is a castle town famous for its samurai history and traditions. Attractions include Tsurugajo Castle, the Oyakuen Garden, Aizu Sake Museum and Enzoji Temple. Aizu Wakamatsu is located in the far west of Fukushima Prefecture and so was largely unaffected by fallout from the 2011 nuclear meltdown on the east coast. The relay train for Aizu Wakamatsu departs just 10 minutes after the Revaty Aizu arrives at Aizu-Tajima. It takes 1 hour and 7 minutes and costs 1,660 yen. 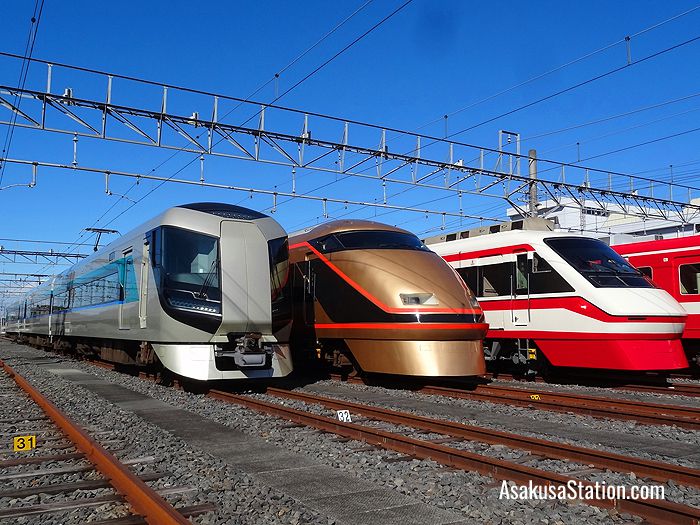 All Revaty services are completely non-smoking. All seats on Revaty services have electrical power outlets and free Wi-Fi is available throughout the train. Revaty trains also have spaces for wheelchairs and washrooms accessible for wheelchair users. These trains are the first Tobu trains to have active suspension which reduces vibrations as the train is moving.

For other services passengers are advised to buy food and drink before the journey.