The Limited Express Ryomo connects the city of Tokyo with destinations in the prefectures of Gunma and Tochigi. At Tobu Asakusa Station the Ryomo departs from platforms 3 and 4. There is an information desk at the entrance to these limited express platforms where you should show your ticket before boarding. As Tobu Railway is a private company this service is not covered by the Japan Rail Pass. 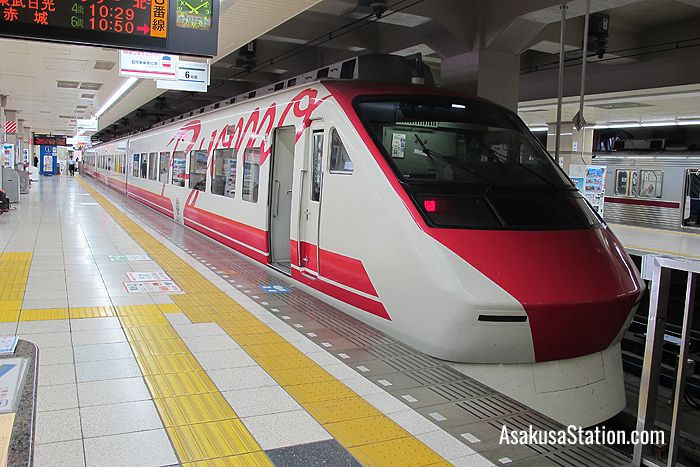 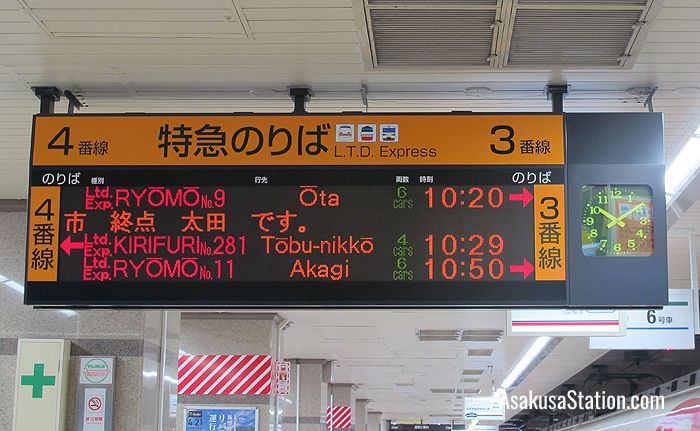 There is one daily service each way between Tobu Asakusa and the following terminal stops: Tatebayashi Station, Kuzu Station, and Isesaki Station.

Services between Asakusa and the terminal stops of Tatebayashi, Ota, and Akagi follow the route below. Not all services stop at Kazo and Hanyu stations.

The daily service for Kuzu stops at the following stations after Tatebayashi:

The daily service for Isesaki stops at the following stations after Ota:

From Asakusa to Akagi:

Akagi Station itself is not a major tourist destination, but there are plenty of interesting locations on this route.

This is the terminus for Tokyo Skytree which is the world’s tallest tower at 634 meters high. The Skytree is a broadcasting tower and also a major tourist destination with plenty of shopping and dining facilities, and upper level observation decks.

At Kita-Senju Station passengers can transfer to the JR Joban Line, the Tsukuba Express, and Tokyo Metro’s Chiyoda and Hibiya lines.

This station is a ten minute walk from Tobu Zoo which is labelled a “hybrid leisure land” as it also includes a theme park with 30 different rides, and a water park with a variety of pools including a wave pool and water sliders. The zoo has 150 species of animal including rare white tigers.

Tatebayashi’s chief attractions are the azalea park at Tsutsujigaoka Koen, the large flower park at Tobu Treasure Garden, Gunma Museum of Art, and Morinji Temple which is known as the setting of a famous folktale about a magical raccoon-dog.

This station serves the city of Ashikaga in Tochigi Prefecture. Ashikaga’s best known attraction is the Ashikaga Flower Park which has a variety of seasonal flower displays and most notably 350 wisteria shrubs that bloom from late April till early May. Other attractions include 700 year old Bannaji Temple, and Ashikaga Gakko which was first founded in the 9th century and is Japan’s oldest school. The school is now a designated National Historic Site and features beautifully restored thatched roof buildings and landscaped grounds.

Ota Station is a ten minute taxi ride from the remains of Kanayama Castle, and nine minutes from Daikoin Temple which was established in 1618 by the shogun Tokugawa Ieyasu.

This station is convenient for the Yabuzuka Onsen hot spring spa resort.

This station serves the city of Kiryu which historically was a center of the silk textile industry. The city has a lot of old architecture, and is especially known for its saw-tooth roof textile mills. Two prominent museums are the Yukari Textile Museum and the Kiryu Textile Memorial Hall.

From Tatebayashi to Kuzu:

The city of Sano is well known for its noodles. There are many delicious ramen noodle shops and a Soba Noodle Festival is held here every October.

Kuzu Station is convenient for Asama Jinja Shrine on Mount Asama. This is not a major tourist destination. However, a dramatic Fire Festival is held here towards the end of July each year. During the festival a long line of large straw bales is set alight to create a fiery trail up the mountain all the way to the shrine on the summit.

From Ota to Isesaki:

The main attraction in the city of Isesaki is Kezoji Amusement Park which has many rides for children, a roller coaster and a large Ferris wheel. 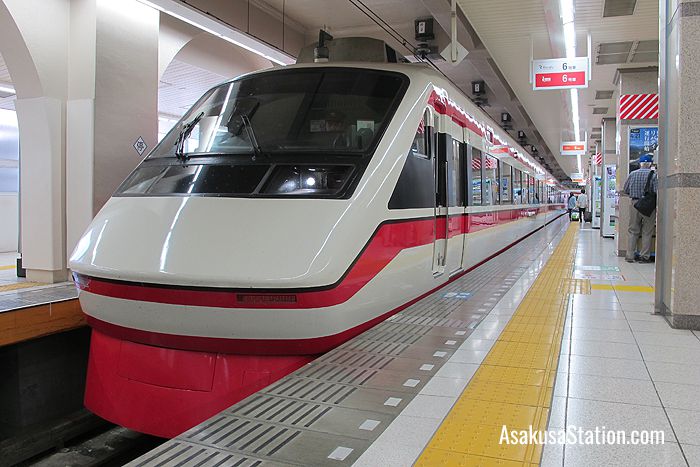 The Limited Express Ryomo does not have an on board kiosk or cart services, so it is a good idea buy supplies at station shops or platform kiosks before boarding the train. On a limited number of services (services #1, #3, and #6) there are vending machines from which you can get soft drinks. All seats are non-smoking.

Complete English PDF timetables for Tobu Limited Express services which include Ryomo services can be downloaded from the official Tobu Railway website.