Tokyo Metro Ginza Line is an underground railway line that runs services between Asakusa and Shibuya. It is operated by the private transport company Tokyo Metro which has a total of 9 different subway lines. Tokyo Metro is one of two separate subway systems in Tokyo, the other being the Toei Subway network. 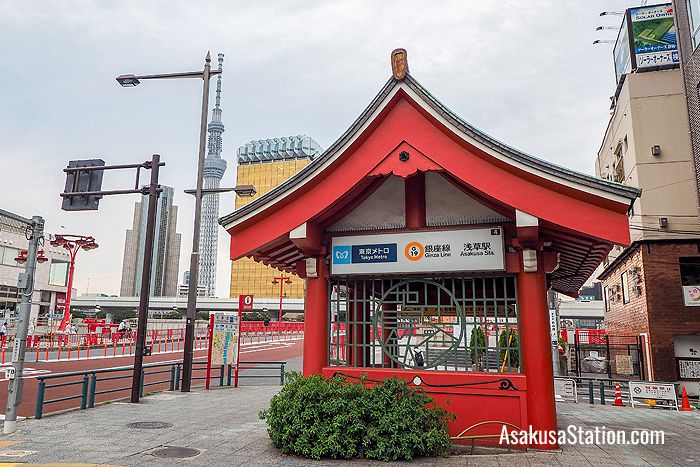 Entrance to the Asakusa Station on the Tokyo Metro Ginza Line

The majority of services on this route run the full length of the Ginza Line, with the exception for some very early or late trains. Services are also regular, running every 2 – 3 minutes, and it is often busy as the line runs through many of Tokyo’s important commercial districts and heavily populated areas. 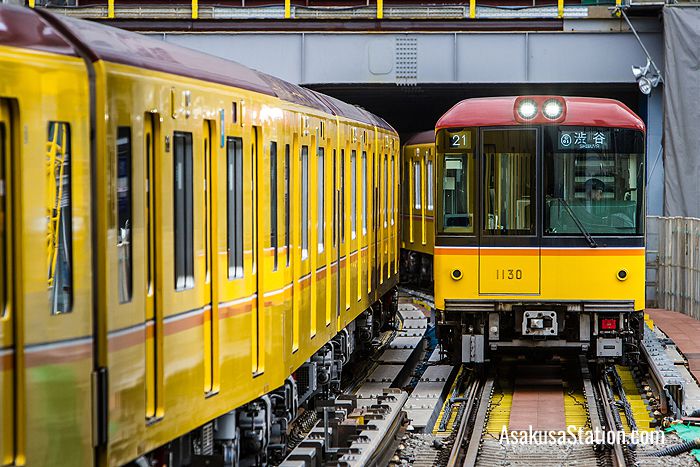 Within the Tokyo Metro system the Ginza Line is color-coded orange. There are 19 stations on this line. These are as follows:

Because Asakusa Station is a terminal station on this line, trains at platforms 1 and 2 are all headed toward Shibuya. Below are the locations you are most likely to visit with transfer points included. Example train times and train fares are given from Asakusa Station. 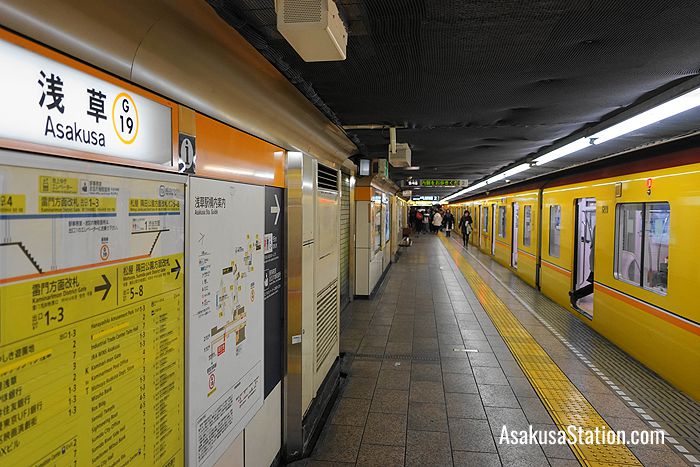 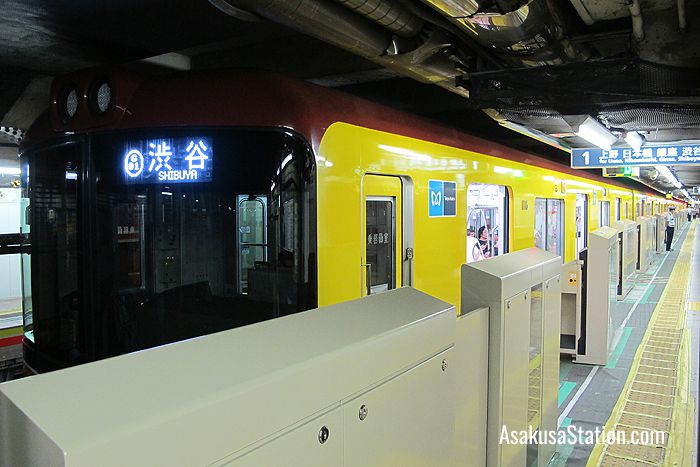 Ueno is a popular location in Tokyo because of its large park, zoo, and many museums. There are also many shrines and temples in the area. Ueno Station is also a major transportation hub. Transfer here to the Tokyo Metro Hibiya Line, and to the Keisei Main Line at nearby Keisei Ueno Station. JR Ueno Station is just above the Metro station and here you can transfer to JR East’s Yamanote, Keihin-Tohoku, Utsunomiya and Takasaki lines, as well as to Tohoku, Yamagata, Akita, Joetsu, Hokuriku, and Hokkaido Shinkansen services.

This station is an 8 minute walk from Kanda Myojin Shrine which was first founded in 730 AD. The station is also within easy walking distance of the Akihabara district which has many wholesale stores selling cheap electronic and computer goods, as well as shops selling manga comics, toys, games, and other anime-related goods.

Nihonbashi is a commercial district of Tokyo with many large department stores. The Mitsui Memorial Art Museum and the Bank of Japan Currency Museum are both within walking distance of Nihombashi Station. Transfer here to the Tokyo Metro Tozai Line and the Toei Asakusa Line. 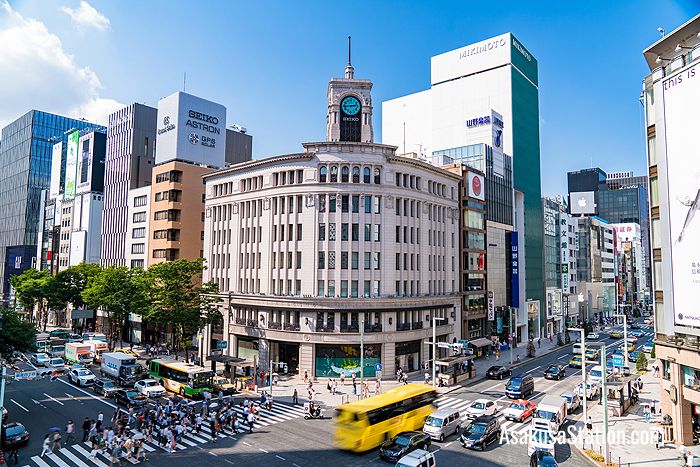 The Ginza 4-chome intersection is the center of Tokyo luxury shopping.

Close by Shimbashi Station are two attractions that will appeal to railway enthusiasts. Displayed outside the station’s Hibiya Exit in “SL Square” is an old steam locomotive dating from 1945. The Old Shimbashi Station Railway Museum is also just a 5 minute walk to the east of the present station building. The present Shimbashi Station is an important transportation hub and transfers can be made here between several railway lines. JR East have services on the Tokaido Main Line, Yamanote Line, Keihin-Tohoku Line and Yokosuka Line. Transfers can also be made to the Toei Asakusa Line, and the New Transit Yurikamome Line which links Shimbashi Station to Toyosu Station via Odaiba.

Toranomon Station is a 6 minute walk from Kasumigaseki Station where you can transfer to the Tokyo Metro Marunouchi, Hibiya, and Chiyoda lines.

The Watari Museum of Contemporary Art is a 6 minute walk west of this station.

Exit here for Omotesando – a tree-lined avenue known for its cool cafes, and international brand name clothing stores. A short stroll down this leafy boulevard leads to Yoyogi Park, the trendy Harajuku area and the entrance to Meiji Jingu Shrine. Transfer here to the Tokyo Metro Chiyoda Line and Tokyo Metro Hanzomon Line. 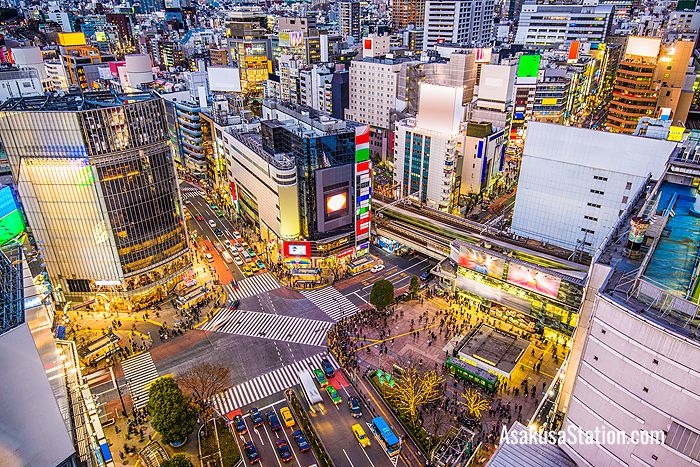 The Shibuya district is a bright center of youth culture and nightlife, packed with department stores, fashion boutiques, restaurants, night clubs and bars. The statue of Hachiko, a dog, is a famous meeting point just outside the station, and beyond the statue is the famous Shibuya Crossing intersection overlooked by giant video screens and neon-lit signs. Transfers can be made here to Tokyo Metro’s Hanzomon and Fukutoshin lines, JR East’s Yamanote, Saikyo, and Shonan-Shinjuku lines, the Keio Inokashira Line, the Tokyu Den-en-toshi Line and Tokyu Toyoko Line. 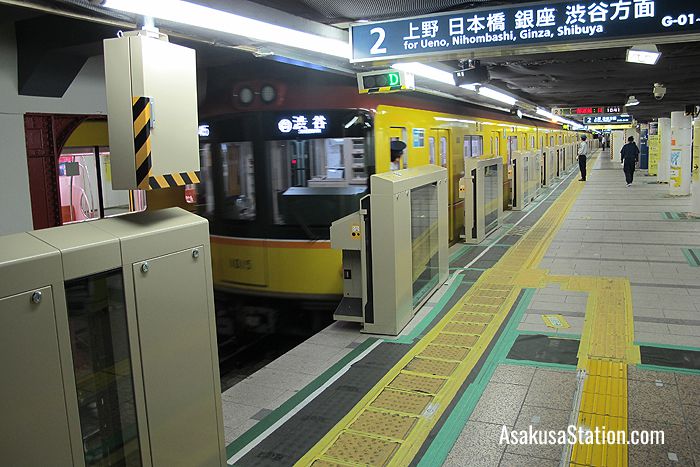 Full adult fares are charged for anyone aged 12 years or older. Children aged between 6 – 11 are charged half the adult fare. Up to two toddlers (aged from 1 – 6) can travel for free if they are accompanied by an adult, however a third toddler will be charged a child’s fare. Infants under 1 year of aged are not charged.

Transfer tickets offer cheaper fares if you need to transfer between the Tokyo Metro and Toei Subway systems. These can be bought from any Tokyo Metro station ticket vending machine.

Prepaid IC cards such as PASMO, Suica and other regional IC cards can be used on Tokyo Metro instead of tickets. Fares for IC cards are cheaper than for regular tickets and IC cards are also useful if you want to transfer between different railway systems without stopping to buy tickets.

The Tokyo Metro 24-hour Ticket gives unlimited rides on Tokyo Metro for 24 hours after its first use. It costs 600 yen for adults and 300 yen for children and can be bought from ticket machines at any Tokyo Metro station.

The Tokyo Subway Ticket is only available for overseas visitors on a tourist visa. This ticket gives unlimited travel on both the Tokyo Metro and Toei Subway. It can be purchased at Haneda Airport, Narita Airport, travel agencies such as JTB, HIS, Kinki Nippon Tourist and Nippon Travel Agency, several hotels in Tokyo and some Big Camera stores.

You will need to show your passport to purchase this ticket. This ticket can also be bought in combination with various rail or limousine bus tickets from either Haneda Airport or Narita Airport. For complete details of how and where to buy this ticket, please visit the Tokyo Metro website.

The Tokyo Combination Ticket gives one day’s unlimited travel on Tokyo Metro Subway lines, JR lines (in the 23 wards of Tokyo) and the complete Toei transportation network (Toei Subway, Toei Bus, Toei Streetcar Arakawa Line, and Nippori-Toneri Liner). The ticket costs 1,590 yen for adults and 800 yen for children. It is available from automatic ticket machines at each station.

Chika Toku is a special discount service available for holders of Tokyo Metro and Toei one day tickets. Simply showing your one day pass entitles you to discount deals at 400 different shops, restaurants, museums, and other facilities around Tokyo. For full details visit the official Chika Toku website.

Free Wi-Fi is available at Tokyo Metro railway stations. For details of how to access this service please visit the Tokyo Metro website.

Tokyo Metro also have an English route search page where you can get information on fares, journey times, and transfers.