The Kaminarimon Gate with its giant red lantern is Asakusa’s most famous landmark and meeting spot, and you will find its image on countless local sightseeing brochures and souvenirs. The two characters 雷門, which are written in black on the front of the lantern, literally mean “Thunder Gate” and give the Kaminarimon its name. Tourists from all over the world come to have their picture taken in front of this dramatic lantern, so it is always a busy location. 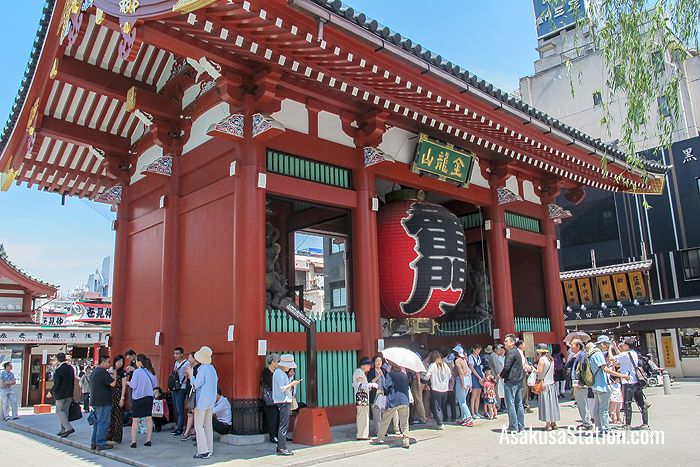 Kaminarimon is a popular spot for commemorative photos

The Kaminarimon is the main entrance to Sensoji Temple, and its more formal name is Furaijinmon which literally means “the gate of the wind god and thunder god”. The characters for this name, 風雷神門, are written on the reverse side of the lantern. Although the gate was first built over a 1000 years ago, it has been destroyed many times by fire, and the current gate dates from 1960. It is an impressive structure, standing 11.7 meters high, 11.4 meters wide, and covering an area of 69.3 square meters. 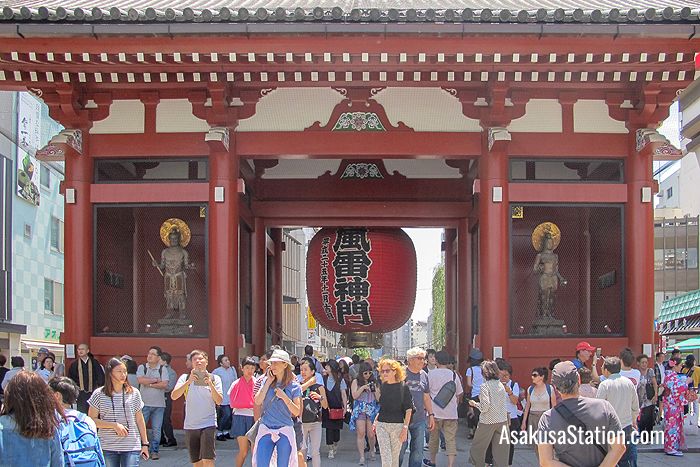 The reverse side of the gate with statues of Tenryu on the left, and Kinryu on the right

Also on the reverse side of the gate are statues of the Buddhist gods, Tenryu and Kinryu which were enshrined here in 1978. These are male and female water dragon spirits and so they will hopefully protect the gate from future fires! Another dragon image can be found carved in wood at the base of the lantern. Be sure to look up as you pass under the lantern or you will miss this beautiful carving! 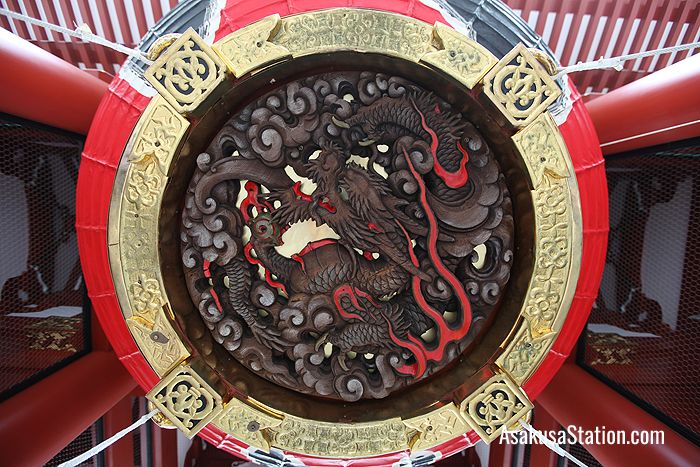 The dragon at the base of the lantern

It is not clear when the gate was first built, but it is believed that a local governor, Taira no Kinmasa, ordered it to be built around the year 942. Originally, the gate was located a little to the south of its current position, in the Komagata district. The gate was not moved to its present location until sometime during or after the Kamakura period (1185–1333). It is believed that when the gate was first rebuilt at the current site two statues were enshrined on either side of the gate. These were a statue of the wind god Fujin on the right, and a statue of the thunder god Raijin on the left, and that is how the gate got its name. People prayed to these gods to protect the temple from storms and floods, and also to bring beneficial weather for their crops. 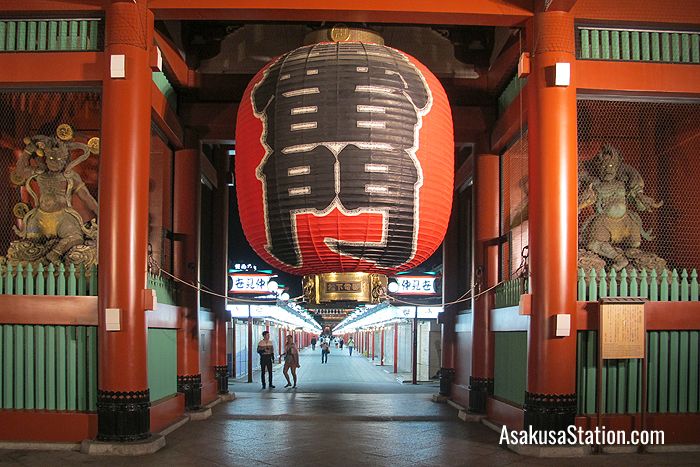 Since it was first built the gate has been destroyed by fire and rebuilt many times. After the last fire in 1865 the gate was not rebuilt for another 95 years. The current gate dates from 1960 when Konosuku Matsushita (the founder of Panasonic) contributed the funds needed to rebuild it. Although only the heads of the Fujin and Raijin statues survived the fire of 1865, these statues were also fully restored with new bodies in 1960. 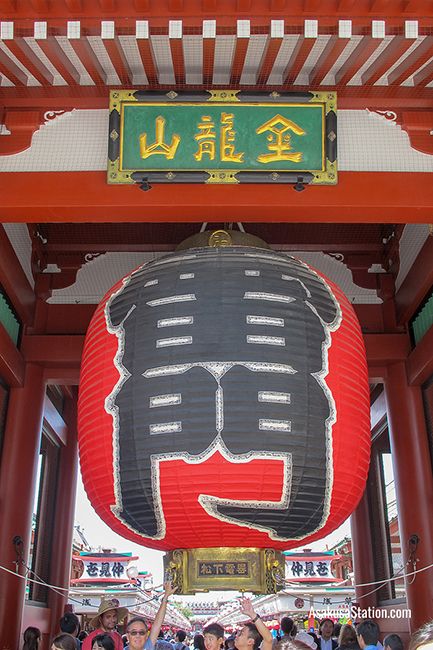 The gate’s gigantic lantern is 3.9 meters high, 3.3 meters wide, and its weight is 700 kilograms. This lantern is of a type called “chochin” which means it has a spiral bamboo frame covered in hundreds of sheets of paper. This spiral frame allows the lantern to be collapsed during the Sanja Matsuri festival when portable shrines need to pass through the gate. Remade at regular intervals by specialist lantern makers in Kyoto, this is the fifth lantern installed since 1960 and dates from 2003. 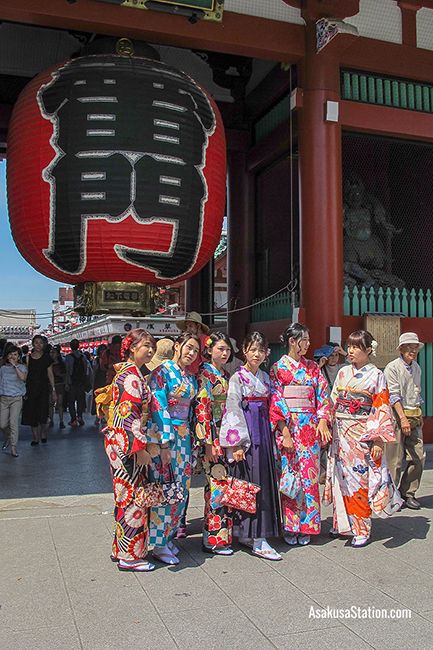 Posing for photographs at the Kaminarimon in Asakusa

The Kaminarimon is free to visit and accessible at all times. It is also illuminated in the evenings, and as there are less crowds at night, this might be the best time to take a photo. 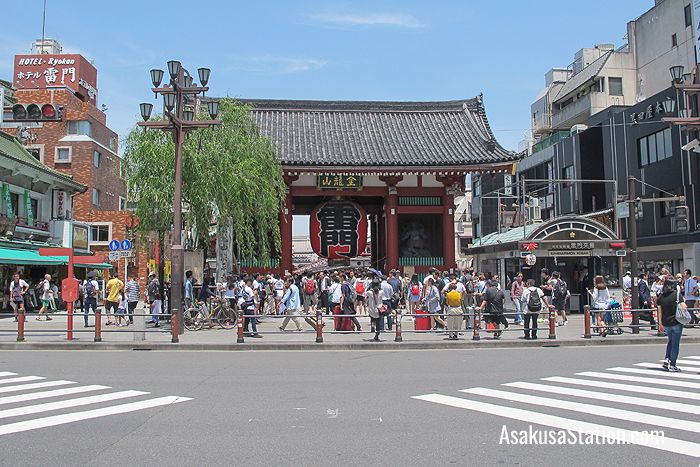 A street view of the Kaminarimon

Just beyond the gate is the Nakamise shopping street. You can walk through this for 800 meters to visit the rest of Sensoji Temple, or if it is too crowded take one of the side streets running parallel to the main route.