The Toei Asakusa Line is a subway line in Tokyo which is part of the Toei Subway network run by Tokyo Metropolitan Bureau of Transportation. This is one of two separate subway systems in Tokyo, the other being Tokyo Metro. There are just four lines on the Toei Subway network: the Asakusa, Mita, Shinjuku, and Oedo lines. The Toei Asakusa line runs between Oshiage Station in the north and Nishi-Magome Station in the south. However, many services do not serve all stations on the line but run between either Oshiage and Sengakuji stations, or Sengakuji and Nishi-Magome stations. 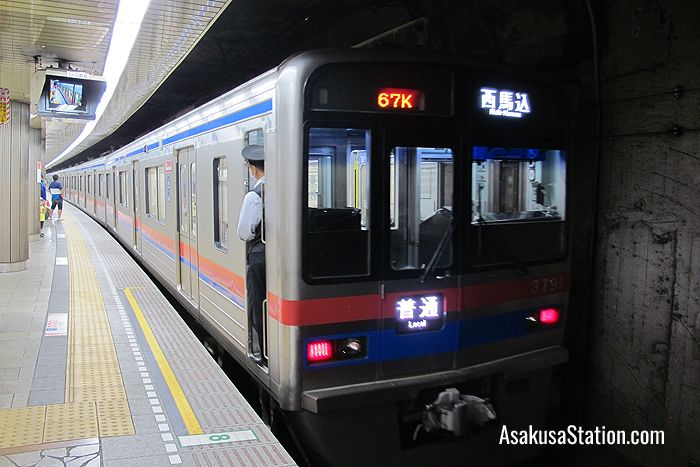 At Toei Asakusa Station trains running south towards Nishi-Magome, the Keikyu Main Line, and Haneda Airport are boarded at Platform 1.

Trains running north towards Oshiage, the Keisei Oshiage Line, and Narita Airport are boarded at Platform 2. 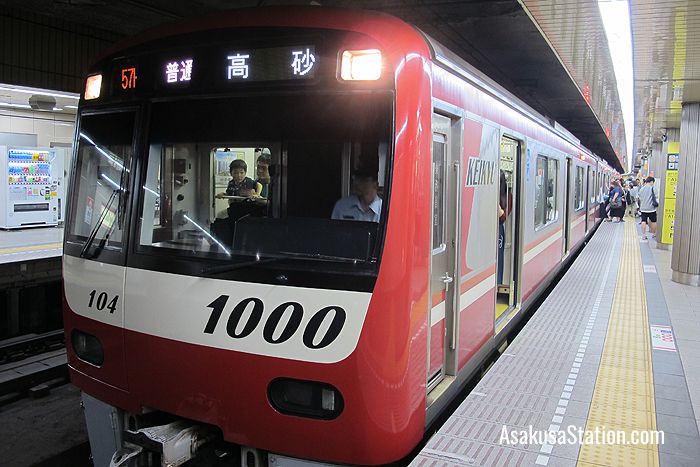 Within the Toei Subway system the Toei Asakusa Line is color-coded “rose”. There are 20 stations on this line. These are as follows:

Most trains whether local, express, or limited express will stop at all stations on the subway line between Oshiage and Sengakuji stations. However, the Airport Express for Haneda Airport does not stop at Honjo-Azumabashi, Kuramae, Asakusabashi, Ningyocho, Takaracho, and Higashi-Ginza stations. Here, listed from north to south, are the locations you are most likely to visit with transfer points included. Example train times and train fares are given from Oshiage Station. 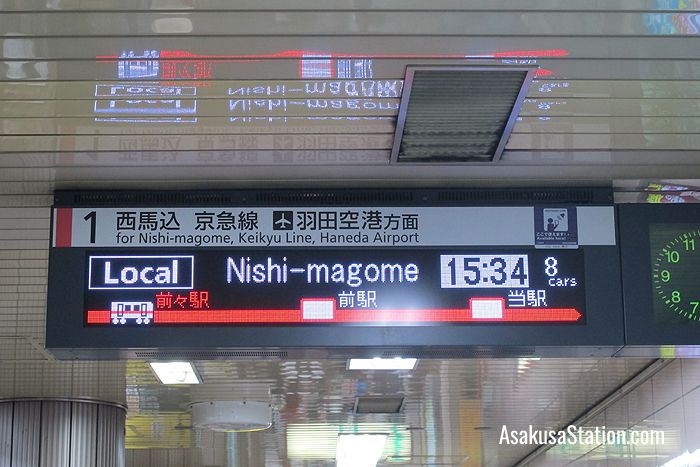 This station is convenient for Tokyo Skytree and is only a 3 minute ride and a 180 yen fare away from Toei Asakusa Station. The Skytree is a broadcasting tower but also a major tourist destination because at 634 meters high it is the world’s tallest tower. In the tower you can find a variety of shopping and dining facilities, and upper level observation decks. Transfers can be made at Oshiage Station to the Keisei Oshiage Line, the Tobu Skytree Line, and the Tokyo Metro Hanzomon Line.

Transfer here to the Toei Oedo Line (color-coded “magenta”) which runs between Tochomae and Hikarigaoka stations.

The area around this station is known for having many wholesale clothing and accessory stores. There are also many traditional doll stores in the Yanagibashi neighborhood which is just across from Asakusabashi Station on the other side of Edo Dori Street. Transfer here to JR East’s Chuo-Sobu Line which runs between Mitaka and Chiba stations.

Ningyocho is an area of Nihombashi with many traditional restaurants, craft and sweet shops. Transfer here to the Tokyo Metro Hibiya Line which runs between Naka-Meguro and Kita-Senju Stations.

Nihonbashi is a commercial district of Tokyo with many large department stores. The Mitsui Memorial Art Museum and the Bank of Japan Currency Museum are both within walking distance of Nihombashi Station. Transfer here to the Tokyo Metro Ginza Line which runs between Asakusa and Shibuya stations or the Tokyo Metro Tozai Line which runs between Nakano and Nishi-Funabashi stations.

There are two attractions for railway enthusiasts near Shimbashi Station. Displayed outside the station’s Hibiya Exit in SL Square there is an old steam locomotive dating from 1945 which is a popular local meeting point. The Old Shimbashi Station Railway Museum is a 5 minute walk to the east of the present station building. Shimbashi Station is an important transportation hub and transfers can be made here between several railway lines. JR East have services on the Tokaido Main Line, Yamanote Line, Keihin-Tohoku Line and Yokosuka Line. Transfers can also be made to the Tokyo Metro Ginza Line, and the New Transit Yurikamome Line which links Shimbashi Station to Toyosu Station via Odaiba.

Daimon Station is close to Hamarikyu Gardens, Kyu Shiba Rikyu Garden, Zojoji Temple, and Tokyo Tower. Transfers can be made here to the Toei Oedo Line. At the nearby Hamamatsucho Station transfers can be made to JR East’s Yamanote and Keihin-Tohoku lines and to Tokyo Monorail which runs services to Haneda Airport.

This station is convenient for the main campus of Keio University. Transfer here to the Toei Mita Line (color-coded blue) which runs between Meguro and Nishi-Takashimadaira stations. At nearby Tamachi Station transfers can be made to JR East’s Yamanote and Keihin-Tohoku lines.

Exit here to visit Sengakuji Temple which is the last resting place of the legendary 47 Ronin; a group of masterless samurai who became famous after taking revenge on the man responsible for the death of their master. Many trains on the Toei Asakusa Line are diverted onto the Keikyu Main Line at Sengakuji Station, so to continue on to the remaining Toei Asakusa Line stations you may need to change trains here.

Transfer here to the Tokyu Ikegami Line which runs between Gotanda and Kamata stations and to JR East’s Yamanote Line.

This is the southern terminus of the Toei Asakusa Line. Exit here for Ikegami Honmonji Temple. This temple was built in honor of Nichiren, the founder of the Nichiren school of Buddhism, who died here in 1282. The temple grounds include many registered Important Cultural Properties, some of which date from the 17th century. The five story pagoda is the oldest in the Kanto region of eastern Japan. 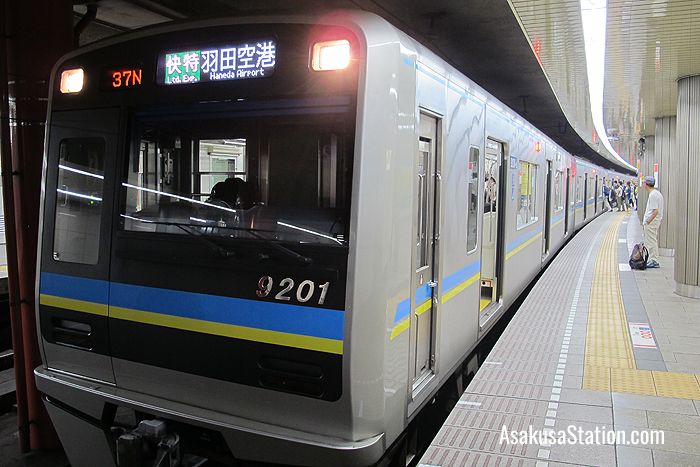 Through services to the following destinations all depart from Platform 1 at Toei Asakusa Station: 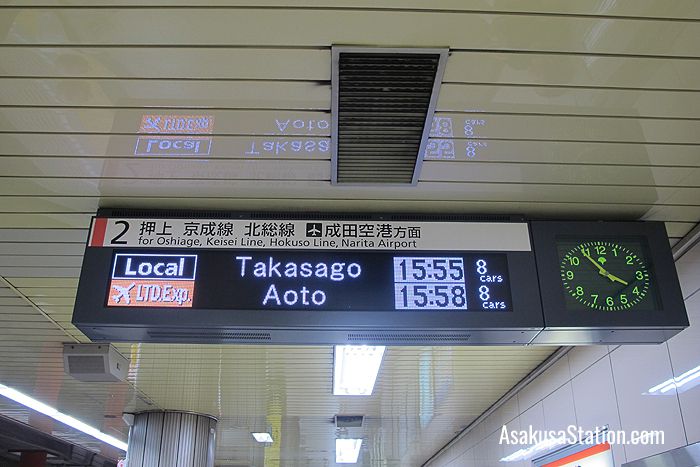 Through services to the following destinations all depart from Platform 2 at Toei Asakusa Station: 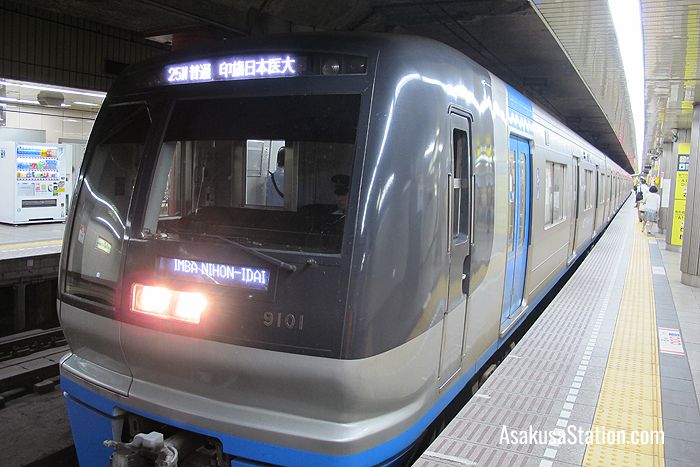 As the Toei Subway and Tokyo Metro are separate systems you will usually need to buy separate tickets to transfer between them. However, if you use a prepaid IC card such as PASMO or SUICA, you can pass freely between these systems without needing to stop and buy tickets. Fares paid by IC cards are also slightly cheaper than those for regular tickets.

A variety of discount passes are available, some of which you can use to travel on both the Toei Subway and Tokyo Metro.

The Tokyo Subway Ticket is only available for overseas visitors. This ticket gives unlimited travel on both the Toei Subway and Tokyo Metro. It can be purchased at Haneda Airport, Narita Airport, travel agencies such as JTB, HIS, Kinki Nippon Tourist and Nippon Travel Agency, several hotels in Tokyo and some Big Camera stores.

You will need to show your passport to purchase this ticket. For complete details of how and where to buy this ticket, please visit the Tokyo Metro website. This ticket can also be bought in combination with various rail or limousine bus tickets from either Haneda Airport or Narita Airport. For details, please visit this Toei website page on airport tickets.

The Tokyo Combination Ticket gives one day’s unlimited travel on Tokyo Metro Subway lines, JR lines (in the 23 wards of Tokyo) and the complete Toei transportation network (Toei Subway, Toei Bus, Toei Streetcar Arakawa Line, and Nippori-Toneri Liner). The ticket costs 1,590 yen for adults and 800 yen for children. It is available from automatic ticket machines at each station.

For the Toei transportation network only, the Toei One-day Pass (also called the Toei Marugoto Kippu) gives one day’s unlimited travel on the Toei Subway, Toei buses, the Toei Streetcar Arakawa Line, and the Nippori-Toneri Liner. It can be bought from subway ticket machines, or on board buses or streetcars and costs 700 yen for adults and 350 yen for children.

Chika Toku is a special discount service available for holders of Toei and Tokyo Metro one day tickets. Simply showing your one day pass entitles you to discount deals at 400 different shops, restaurants, museums, and other facilities around Tokyo. For full details visit the official Chika Toku website.

Free Wi-Fi is available on some trains on this line and at the following stations: Daimon, Shimbashi, Higashiginza, Nihombashi, Ningyocho, Higashi-Nihombashi, Asakusa, and Asakusabashi. For Wi-Fi access details, please visit the official Toei website.

Toei Subway also have complete online timetables for all of their stations and an English Route Search page where you can get information on fares and journey times.