Tokyo Skytree is a broadcasting tower and a major sightseeing attraction in Tokyo. The tower’s soaring white structure is clearly visible from many parts of the city, and is an essential stop on any Tokyo trip. 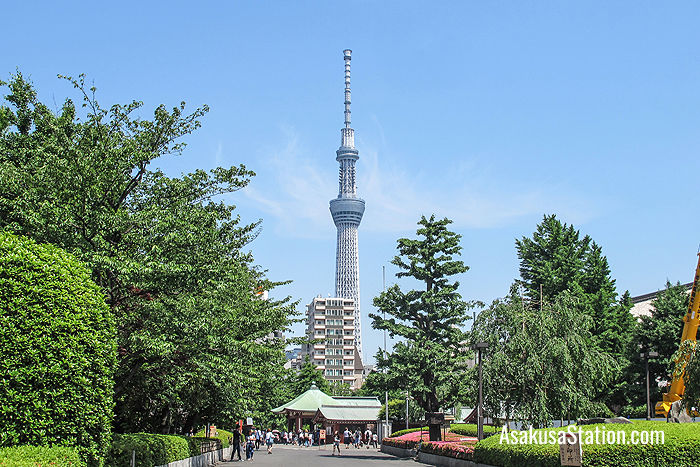 The view of Tokyo Skytree is a familiar sight around Tokyo

Tokyo Skytree stands an incredible 634 meters high which makes it both the tallest structure in Tokyo and the world’s tallest tower. The height of the tower was actually chosen deliberately as a tribute to Tokyo’s history. In the Japanese language, 634 can be pronounced mu-sa-shi, and Musashi is the name of the historical province that once covered the area of modern Greater Tokyo. 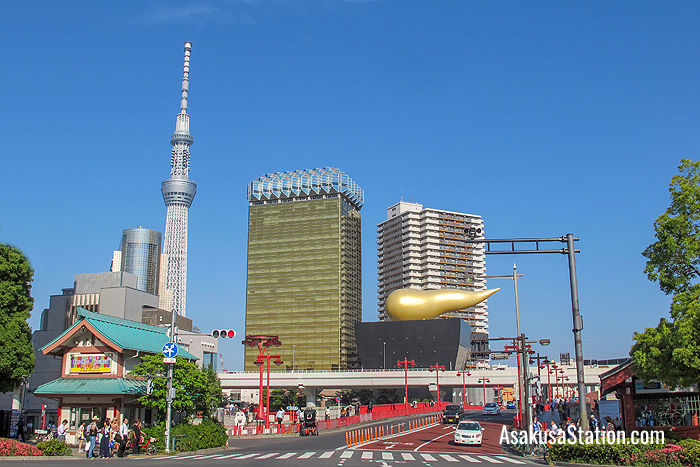 Tokyo Skytree and the golden Asahi Flame viewed from Asakusa

The tower opened to the public in 2012 and is now one of Tokyo’s most famous landmarks. In addition to operating as a broadcasting tower for radio and television, Tokyo Skytree includes a range of facilities for visitors, which include observation decks, souvenir shops, two cafes and a restaurant. The tower is also the focal point of the Tokyo Skytree Town commercial development. This includes the Tokyo Solamachi mixed-use complex which stands on either side of the tower and provides a wide range of shopping, dining, and entertainment facilities. 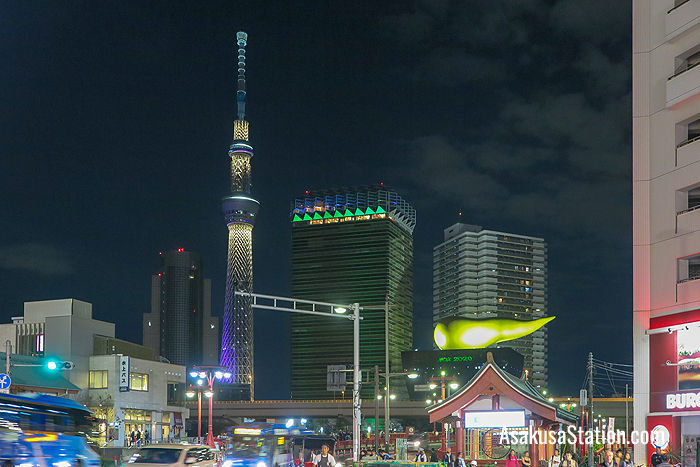 An evening of Tokyo Skytree and the Asahi Flame. The tower is illuminated at night

Tokyo Skytree has two observation levels which have separate entrance fees. These are the Tembo Deck at 350 meters high, and the Tembo Galleria at 450 meters high. 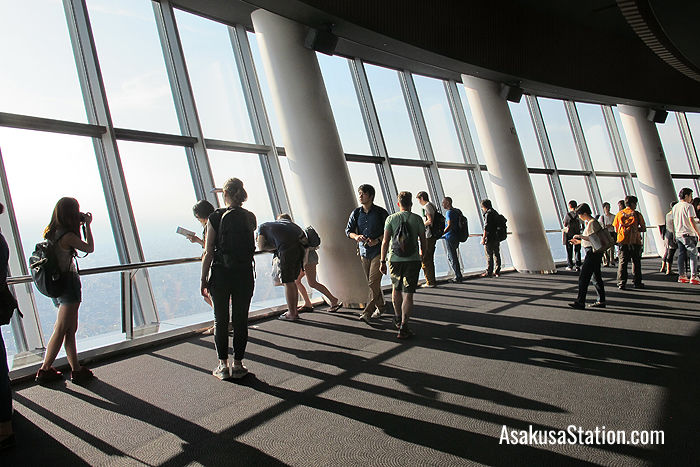 Inside the Tembo Deck on Floor 350

The first observation level is called the Tembo Deck and it has three floors: Floor 340, Floor 345, and Floor 350. The elevator from the 4th floor entrance will take you directly to Floor 350.

Floor 350 is the main observation floor for the Tembo Deck, and so it has expansive windows offering panoramic views over the city. 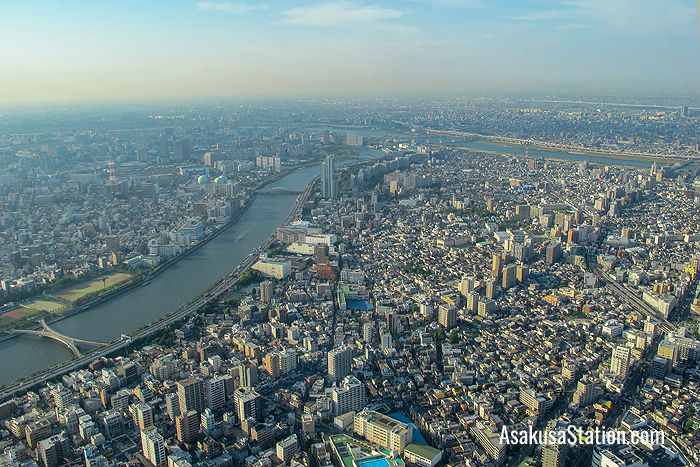 At four locations on the Tembo Deck there are digital touch-screens which you can use to pick out and identify some of the buildings and locations in the view from the tower. To add a sense of history, there is also a large reproduction of a folding screen by Keisai Kuwagata (1764 – 1824) which depicts the same landscape as it would have looked in the Edo era. 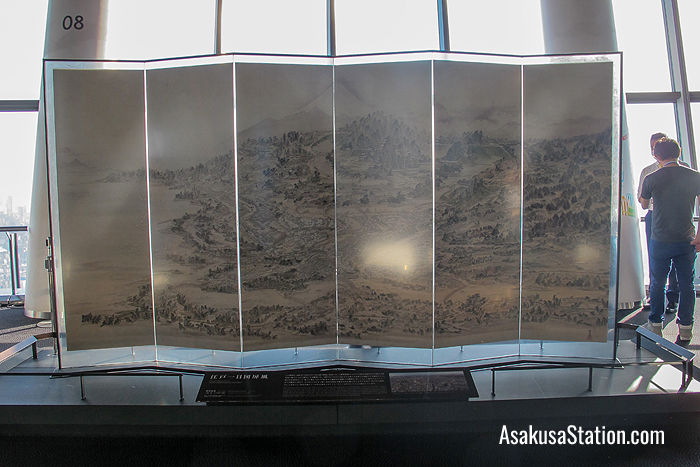 There is also a standing café service on Floor 350 where you can get snacks, soft drinks, alcoholic drinks, and ice creams. If you would prefer to sit down then you should head to the sit-down café on Floor 340, or the restaurant on Floor 345. 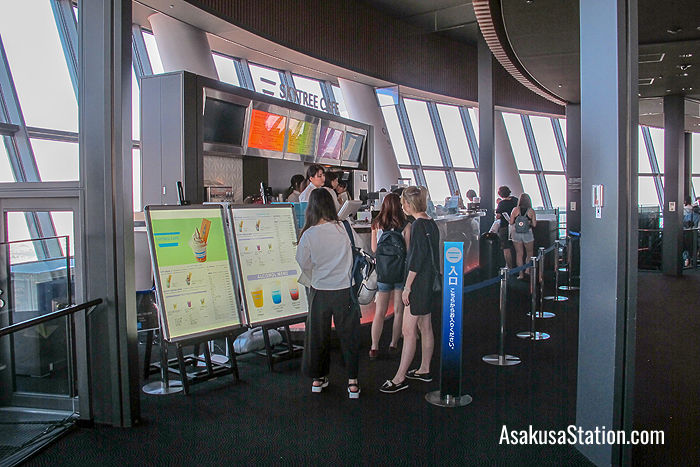 The standing café on Floor 350

On Floor 345 you can find a souvenir shop and the Sky Restaurant Musashi. The restaurant serves a fusion of traditional and modern influences called “Tokyo cuisine” for both lunch and dinner. Enjoying a meal here with the breathtaking view and excellent service is sure to be an unforgettable experience. However, to dine at this restaurant you must make a reservation in advance. For more information about the menu and for booking details visit the official restaurant website. 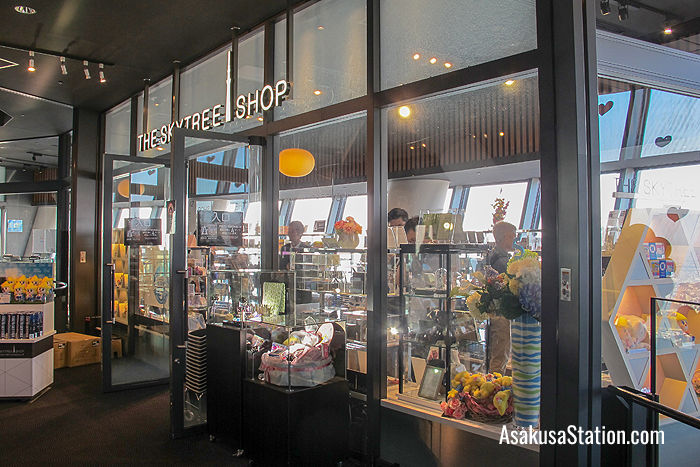 The souvenir shop on Floor 345

On Floor 340 you can find a more casual café with plenty of seating where you can enjoy a light meal and a drink. This café’s food menu includes sandwiches, curries, and a variety of desserts. The drinks menu includes beer, sparkling wine, tea, coffee, cola, ginger ale, and fruit juice. 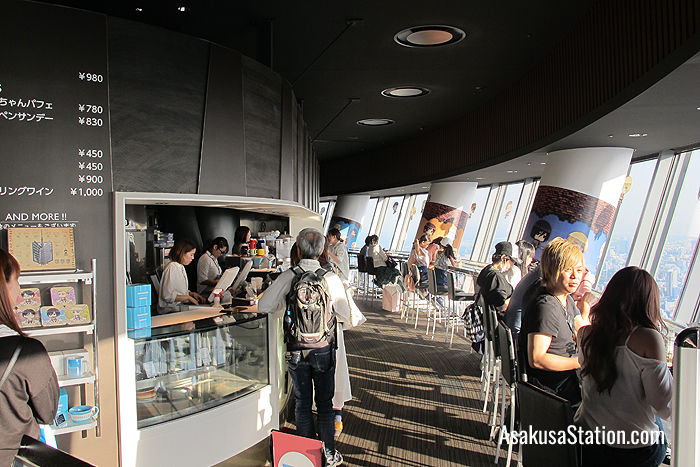 Floor 340 also features an area with a glass floor where you can experience an “intense view” of the world 340 meters below your feet! 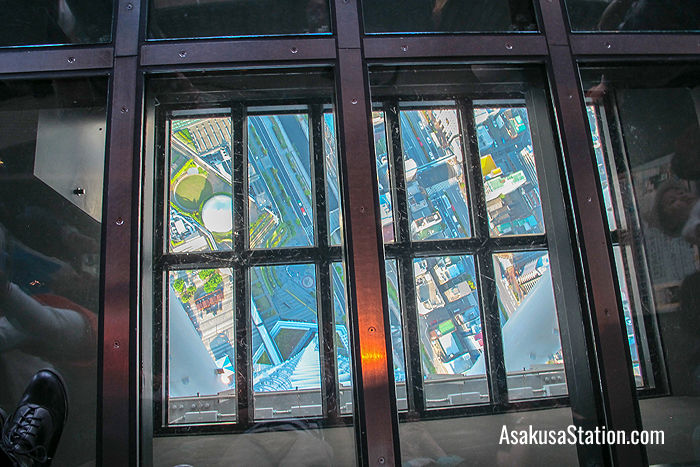 The view through the glass floor 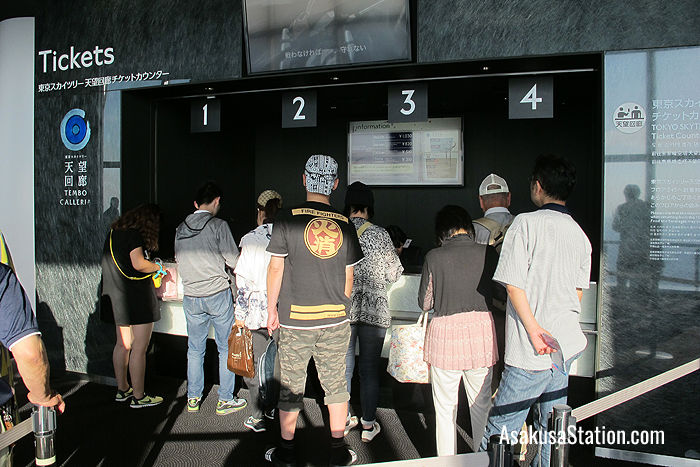 The ticket office for Tembo Galleria on Floor 350

The Tembo Galleria has two floors which are connected by a rising glass-covered spiral corridor which takes you all the way to the highest point at 451.2 meters high. 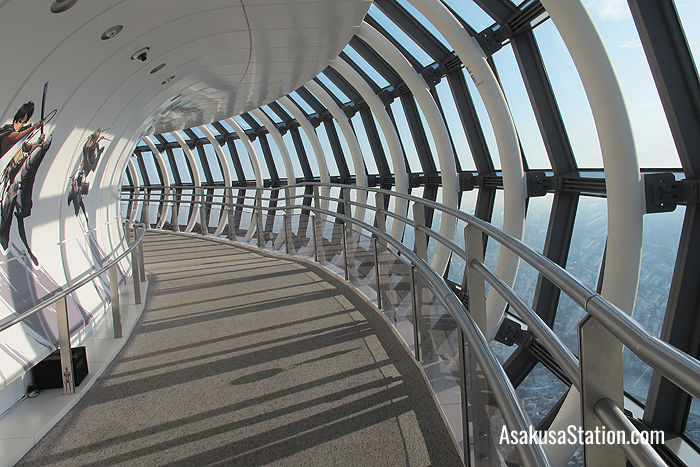 Inside the Tembo Galleria

Naturally the views from the upper level are spectacular and apparently when the weather is clear, a view of Mount Fuji is possible. 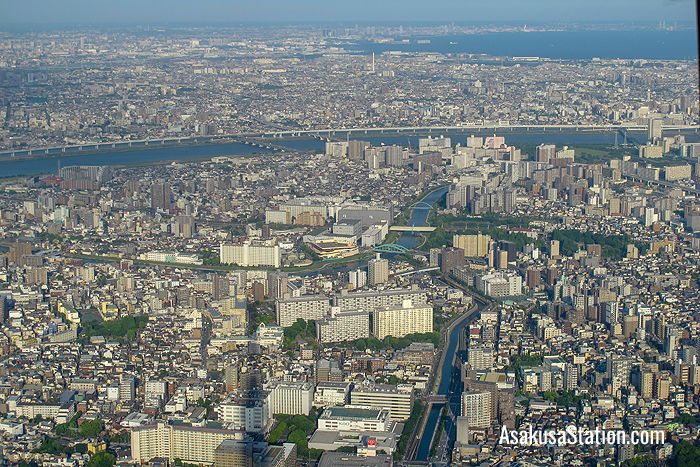 The view from the Tembo Galleria

From the upper floor you can then take an elevator back down to Floor 345. 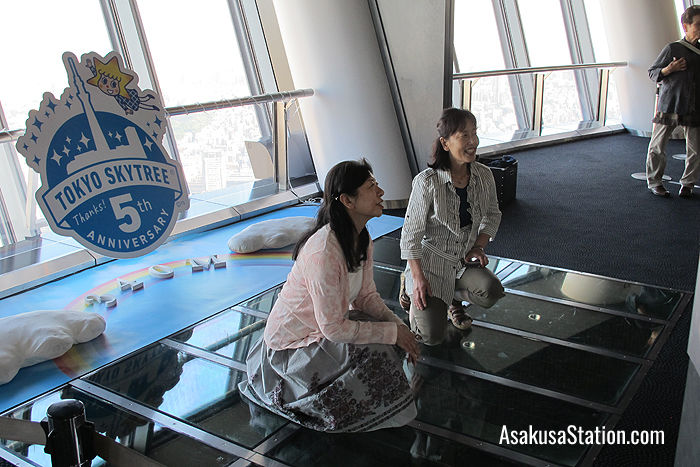 In addition to the souvenir shop on Floor 345 there are shops on the 1st and 5th floor of the tower.

Group tickets (for ten or more people) are sold on the 1st floor of the tower, however the main ticket counter and entrance is on the 4th floor. 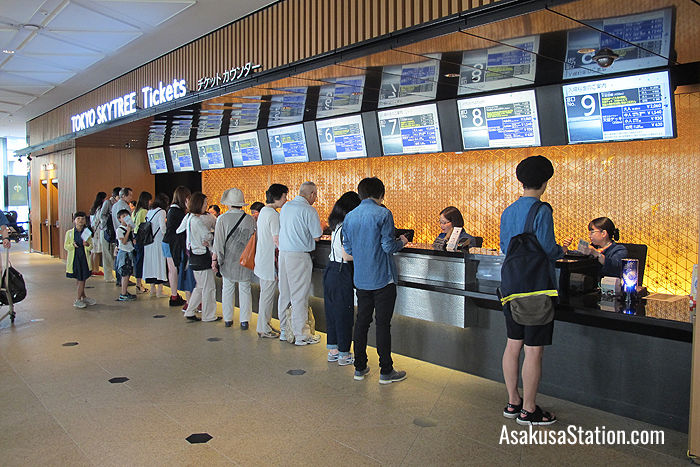 The regular Skytree Ticket Counter on the 4th floor

On the 4th floor there are actually two ticket counters with different ticket options. The regular ticket counter has cheaper tickets, but if it is busy then you might have to wait in line for a long time. Also, if you buy your ticket here, you can only buy a ticket for the first observation level; the Tembo Deck. If you want to visit the higher level Tembo Galleria as well, you will have to buy another ticket when you reach the Tembo Deck on Floor 350. 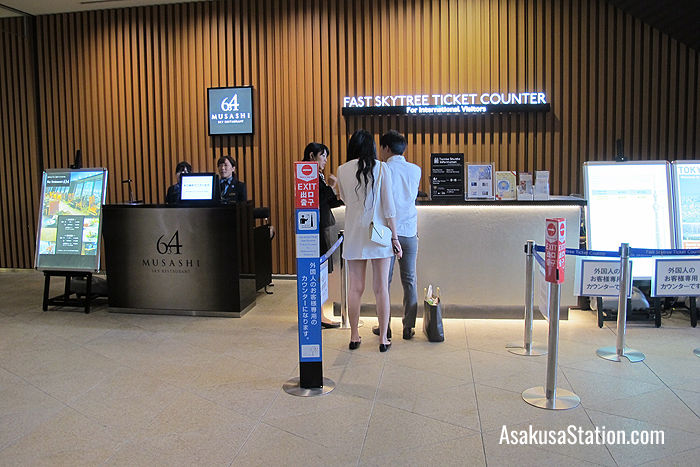 There is also a Fast Skytree Ticket Counter which offers an express service for international visitors. Tickets here are a little more expensive, but you won’t have to wait in line for such a long time. It is also possible to buy a combination ticket here for both the Tembo Deck and the Tembo Galleria. To use this service you will need to show your passport. Here are the ticket prices at each counter:

* Children aged 3 or younger can enter for free.
* People with disability ID cards can get a half price discount on regular tickets, but there is no disability discount for Fast Skytree Tickets.

Obviously, regular tickets are a lot cheaper, so it’s a good idea to check how long the lines are at the regular ticket counter before deciding if you want to use the express service at the Fast Skytree Ticket Counter. 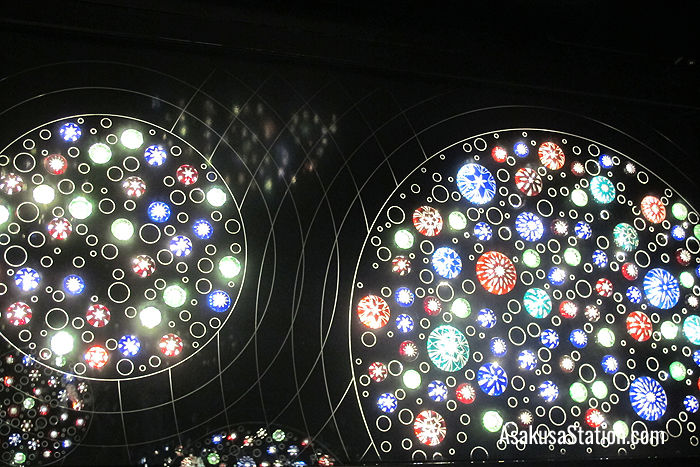 A “summer” themed light show in one of the shuttle elevators

Once you have bought your tickets you can take one of four “shuttle” elevators, which will take you directly to Floor 350 of the Tembo Deck in just 50 seconds. During the course of the ride each shuttle has a unique light show with a seasonal theme and different patterns representing cherry blossoms, birds, fireworks, and festival floats.

Tokyo Skytree stands in the center of the Tokyo Solamachi commercial complex which contains hundreds of shops, multiple dining areas, a planetarium, an aquarium, and a Post Office Museum. 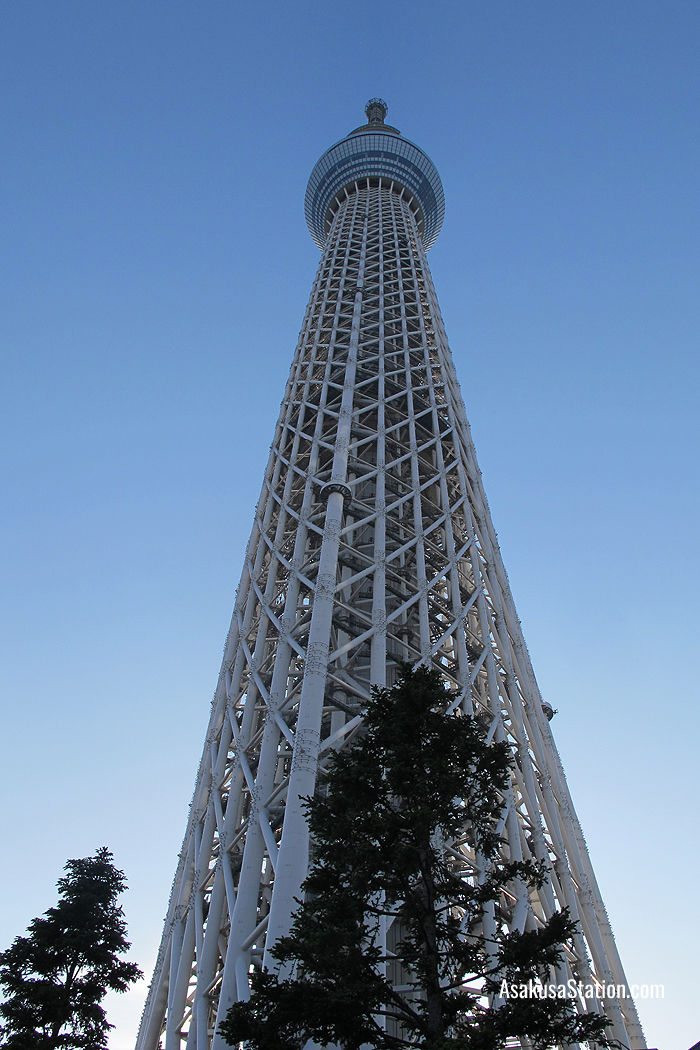 Tokyo Skytree is located in the Oshiage district which is on the east bank of the Sumida River. The tower is served by two railway stations: Tokyo Skytree Station and Oshiage Station. From either station it is a 3 minute walk to the tower. 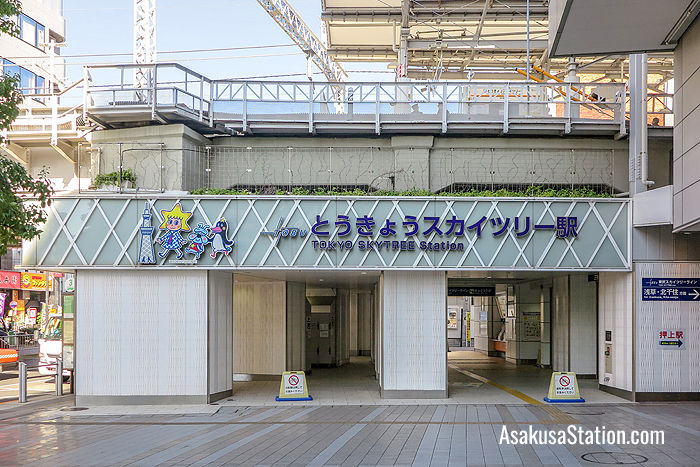 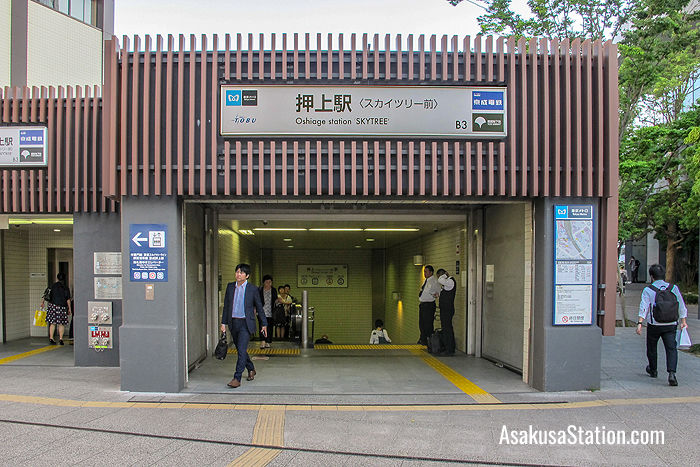 From Toei Asakusa Station take the Asakusa Line to Oshiage Station in 3 minutes for 180 yen.

It is also possible to walk to Tokyo Skytree from Asakusa, and this will take around 20 minutes.