The Tobu Skytree Line is a railway line operated by Tobu Railway that runs between Tobu Asakusa Station in Tokyo and Tobu-Dobutsu-Koen Station in Saitama Prefecture. 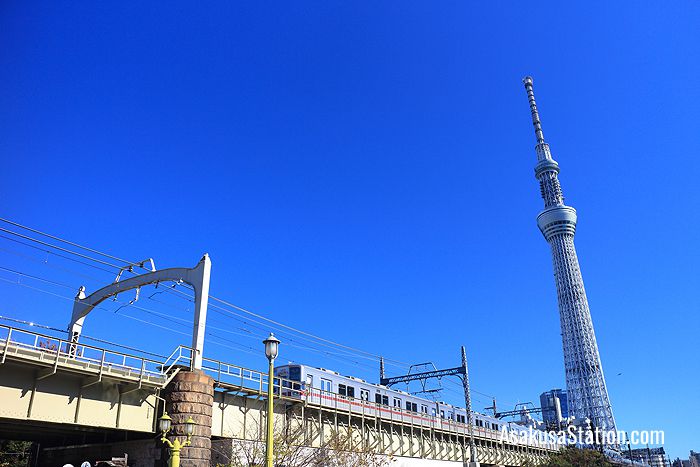 There are 30 stations on the Tobu Skytree Line. Please note that, although it is officially part of the same line, Oshiage Station is actually connected to the main Tobu Skytree Line by a separate extension line that runs between Oshiage and Hikifune Stations. 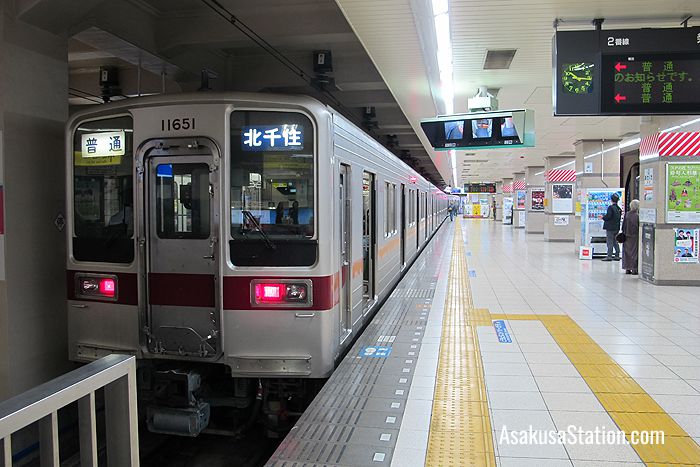 The key destinations with transfer points are given below, with example train fares and journey times given from Tobu Asakusa Station. 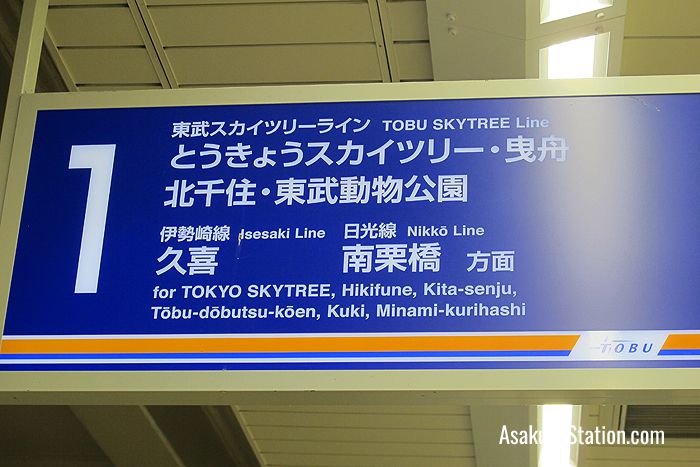 Located in the Ekimise department store building, Tobu Asakusa is ideally positioned for easy access to Asakusa’s best sightseeing, shopping, and dining locations. The iconic Kaminarimon or “thunder gate” of Sensoji Temple is just a five minute walk to the west. Tokyo Cruise pleasure boats can be boarded at the Asakusa Pier just 3 minutes’ walk to the east. And the area is very convenient for lively shopping arcades, specialty restaurants, and hotels to suit every price range. 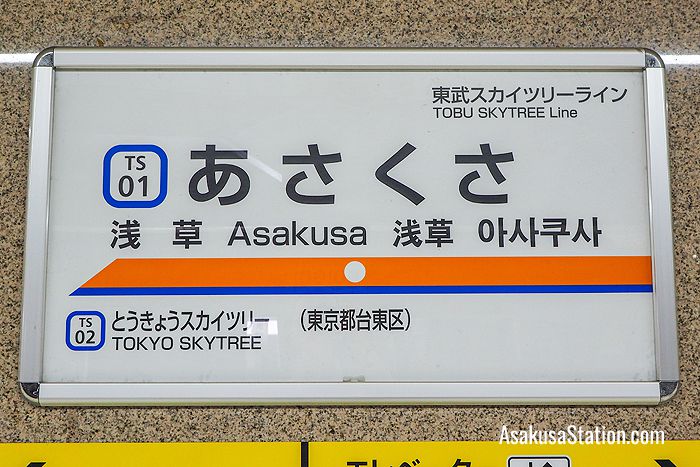 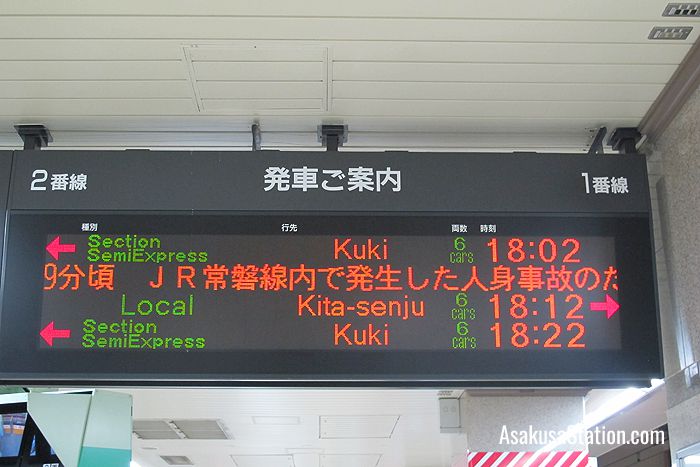 Exit here for Tokyo Skytree, the world’s tallest tower at 634 meters high. The tower is popular for its upper level observation decks which offer stunning views over the city. Lower levels contain a variety of restaurants and souvenir shops.

Oshiage Station is a 3 minute walk from Tokyo Skytree. Transfer here to the Tokyo Metro Hanzomon Line, The Toei Asakusa Line and the Keisei Oshiage Line.

Exit here for the Tobu Museum, Mukojima-Hyakkaen Gardens, and the Seiko Museum. The Tobu Museum is a railway museum directly under Higashi-Mukojima Station which has several classic trains on display. Mukojima-Hyakkaen Gardens is a beautiful Edo era flower park a 5 minute walk to the west of the station. The Seiko Museum is dedicated to the general history of clocks and watches as well as that of the Seiko brand. It is located a 5 minute walk north of the gardens.

Ushida Station is close to Keisei-Sekiya Station and there you can transfer to the Keisei Main Line.

Kita-Senju is a commercial district dominated by two large department stores: Marui and Lumine. There are many shopping arcades around the station packed with cheap restaurants and bars. Transfer here to the JR Joban Line, the Tsukuba Express, and Tokyo Metro’s Chiyoda and Hibiya lines.

This station is a 10 minute walk from Tobu Zoo. A “hybrid leisure land” the zoo also includes a theme park with 30 different rides, and a water park with a variety of pools including a wave pool and water sliders. At the zoo itself you can see 150 animal species including very rare white tigers. Transfer here to the Tobu Isesaki Line and the Tobu Nikko Line. 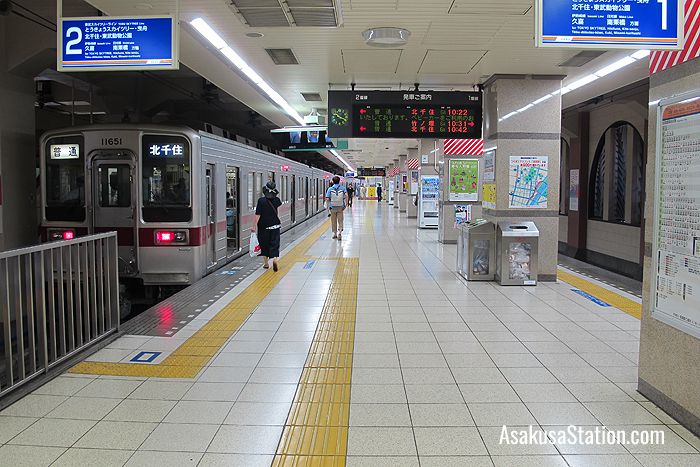 Platforms 1 and 2 at Tobu Asakusa Station 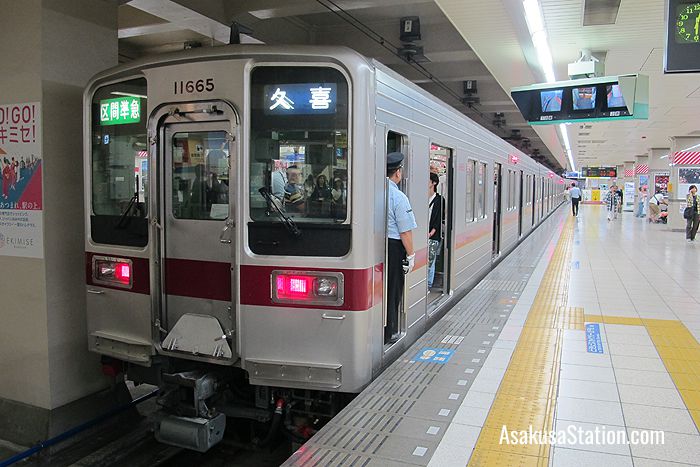 Many services from Tobu Asakusa Station continue beyond Tobu Dobutsu-Koen Station to destinations on either the Tobu Nikko or Tobu Isesaki lines. Tobu Railway also runs through services from the Tobu Skytree Line onto two Tokyo Metro lines. Local services bound for Naka-Meguro Station join the Tokyo Metro Hibiya Line at Kitasenju Station. Semi-Express and Express services from Hikifune Station join the Tokyo Metro Hanzomon Line at Oshiage Station. Almost all of these through services on the Hanzomon Line join the Tokyu Den-en-toshi Line after Shibuya Station and then continue as far as the final stop at Chuo-Rinkan Station in Kanagawa.

Fares between stations on this line range from 150 yen for adults and 80 yen for children, to 590 yen for adults and 300 yen for children. Adult fares are charged for anyone aged over 12 years of age. Child fares are charged for children between 6 – 11 years of age. Up to two infants (aged between 1 and 5) can ride for free if accompanied by a ticket holding adult or child. If there are more than two infants they will need a child’s ticket. Babies under 1 year old can ride for free. The Tobu website has a bilingual fare table showing all fares and connections from Tobu Asakusa Station.

Prepaid, rechargeable IC smart cards such as PASMO and other major regional cards can be used on Tobu Railway lines instead of regular tickets. PASMO cards are available from Tobu ticket vending machines and ticket counters. To use them simply touch the card to the card reader on a ticket gate and the fare is deducted automatically. Fares for these IC cards are cheaper than for regular tickets, and you can use these cards on other rail or bus services in Tokyo too.

You can download a PDF route map of all Tobu railway lines from the official Tobu website.

Use English language route planners by Jorudan or Hyperdia to quickly find information on travel times, transfers, and fares.

Tobu Railway offer free Wi-Fi at many of their stations as well as on some limited express trains. For details of how to access the Wi-Fi service please visit the Tobu Railway website.