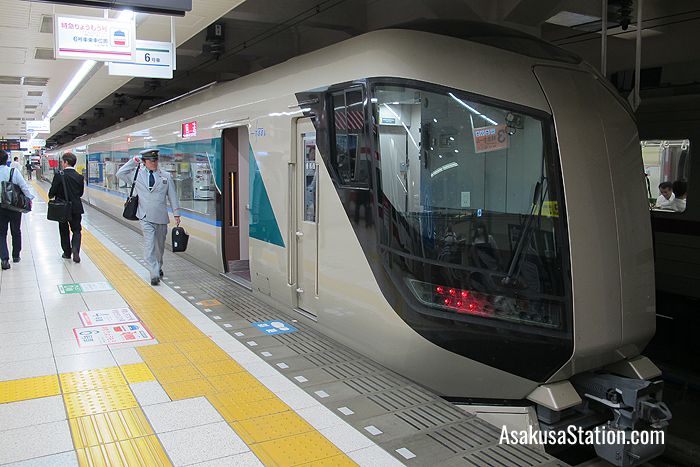 Cars 4-6 of Urban Park Liner #3 follow the same route until Kasukabe Station but then stop at the following stations:

The key destinations of these services are given below. Example train times and rail fares (including limited express surcharges) are from Asakusa. 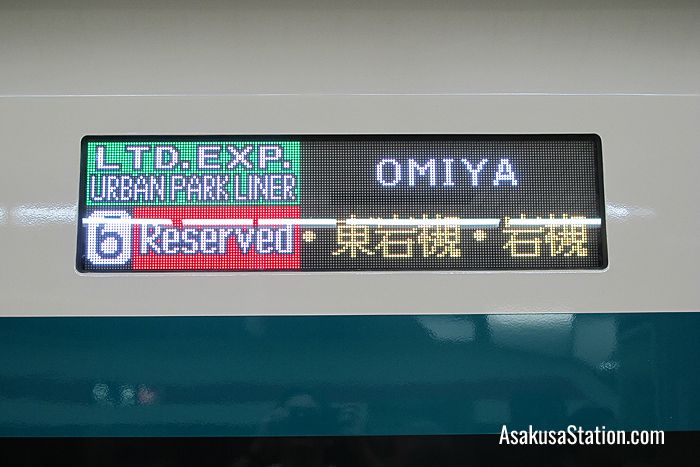 This station serves Tokyo Skytree which is the world’s tallest tower at 634 meters high. The Skytree is both a broadcasting tower and a major tourist destination with lots of shopping and dining facilities, and upper level observation decks.

The city of Kasukabe in Saitama Prefecture is best known as the setting of the Crayon Shinchan series of manga comics and anime cartoons. There is a game center dedicated to Crayon Shinchan on the top floor of the Lala Garden shopping center which is just 7 minutes’ walk from Kasukabe Station.

Kasukabe Local History Museum is also just a 10 minute walk from Kasukabe Station. The RyuQkan museum is a 15 minute drive from the station and offers free tours of the “G-Cans Project”. This is the world’s largest underground drainage facility. However, as tours are only available in Japanese, you will need to bring an interpreter.

Fuji Dori (literally “Wisteria Street”) runs south from Kasukabe Station to Onuma Park and has a 1.1 km long wisteria trellis which blooms every spring. A Wisteria Festival (Kasukabe Fuji Matsuri) is held here every April with parades and performances of music and dance.

Iwatsuki is famous as a historical center for the making of dolls. The Tokyu Doll Museum and the Togyoku Doll Museum are both within walking distance of the station. Iwatsuki station is also convenient for Iwatsuki Castle and its surrounding park which is famous for its cherry trees and iris pond.

Omiya is a ward of Saitama City and has a number of attractions including Omiya Railway Museum, Hikawa Shrine which is said to date from 473 BC, Omiya Bonsai Village, which is the center of bonsai culture in Japan, and Omiya Bonsai Art Museum.

This station is close to Ushijima-no-Fuji Park, a garden which is famous for its wisteria and in particular for one tree which is 1,200 years old and is a designated National Treasure. The garden is only open to the public from late April to early May.

This station is convenient for Shimizu Koen Park which has numerous facilities including seasonal flower displays, pony rides, a water fountain maze, an obstacle course for kids, a camp ground with bungalows, and barbecue facilities.

This station is convenient for the Kikkoman Soy Sauce Museum. Sekiyado Castle is a 30 minute taxi ride from the station. 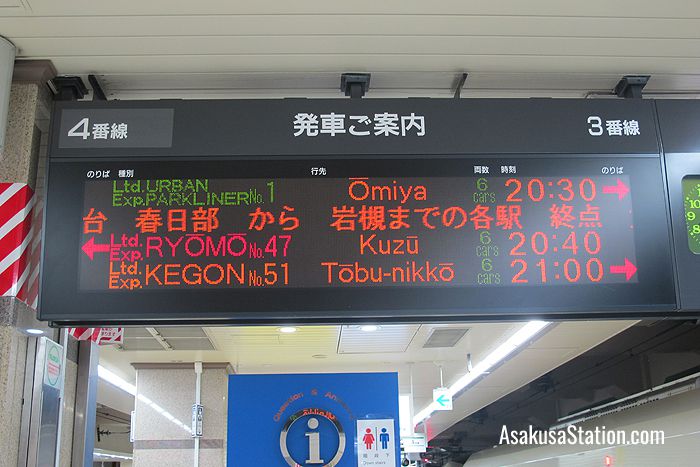 Timetables for key stops on all three services are given below. For complete timetables please visit the official Tobu Railway website.

The Urban Park Liner, in common with other Revaty series trains, is notable for its sleek design, and comfortable seating. This train has a free Wi-Fi internet service and electrical power outlets at each seat. This train also has spaces for wheelchairs and universal access toilets. Food and drink are not sold on board the train so it is recommended that passengers buy their provisions at the station before boarding. All cars on the Urban Park Liner are completely non-smoking.

At Tobu Asakusa Station the Urban Park Liner departs from platforms 3 and 4. There is an information desk at the entrance to these limited express platforms where you should show your ticket before boarding. As Tobu Railway is a private company the Urban Park Liner service is not covered by the Japan Rail Pass.