Mimeguri Jinja Shrine is a Shinto shrine on the east side of the Sumida River. This is a small shrine, but because it is located about midway between Ushijima Jinja Shrine and Kofukuji Temple it is easily visited when walking between those two locations. 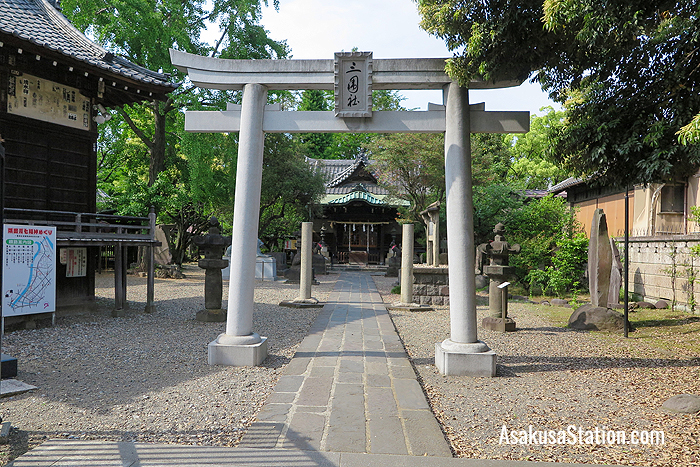 The entrance to Mimeguri Jinja Shrine

Mimeguri Jinja is dedicated to the god Uganomitama who is a god of food and rice. Uganomitama is closely associated with the god Inari who is the god of rice and agriculture. For this reason there are two fox statues guarding the front of main shrine building. Foxes are believed to be the messengers of Inari, so these statues are often seen at Inari shrines. 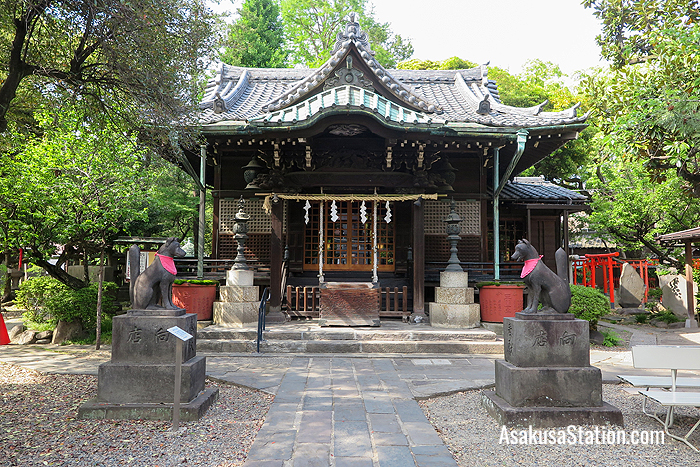 The exact origins of Mimeguri Jinja are unclear, but there is an old legend about it. In the middle of the 14th century a monk named Genkei was traveling in the area when he discovered a small ruined shrine at the side of the Sumida River. Genkei thought it was a pity that the shrine had fallen into such a terrible condition and decided to rebuild it himself. In order to do so, he dug into the ground and discovered a jar buried there. Inside the jar was a statue of an old man riding on the back of a white fox. In his right hand the old man held a jewel, and in his left hand an ear of rice. At the very moment that Genkei discovered this statue an actual white fox suddenly appeared and ran around the statue three times before disappearing again. This is how the shrine got its name “Mimeguri” which means “three times around”.

Today Mimeguri Shrine is more closely associated with the Mitsui clan who have been a powerful family of merchants and industrialists since the 17th century. The Mitsui family opened their first kimono shop in Tokyo in 1673. Around that time they chose Mimeguri Jinja as their guardian shrine. One of the main reasons they chose this shrine seems to be that the characters for their name Mitsui (三井) and those for Mimeguri (三囲) are very similar. A number of statues on the shrine grounds have been donated by the Mitsui family. One of the more unusual statues is that of a lion which was moved here from the old Ikebukuro branch of Mitsukoshi department store in 2009. 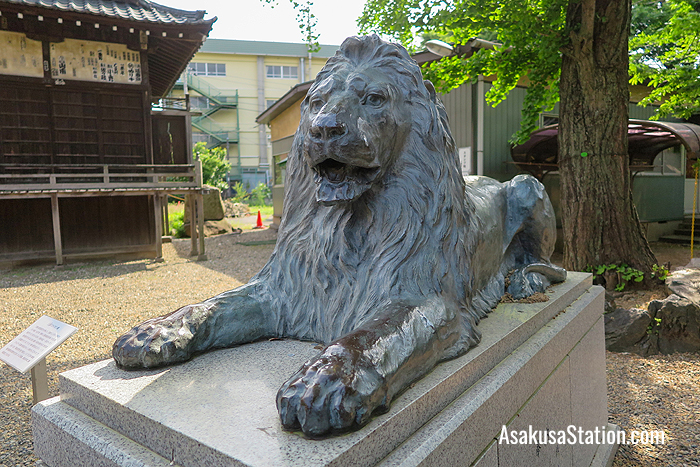 The Mitsukoshi chain also has its roots in the Mitsui family business, and all Mitsukoshi department stores have these lion statues which are modelled on the lions in London’s Trafalgar Square. That is why a lion stands guard over Mimeguri Jinja together with the traditional foxes.

Mimeguri Jinja Shrine is a 10 minute walk from Tokyo Skytree Station and 15 minutes from the Tobu, Toei, and Tokyo Metro Asakusa stations. A visit to this shrine can be easily combined with a visit to Ushijima Jinja Shrine, Sumida Heritage Museum, and Kofukuji Temple which are all nearby. Here is a map showing Mimeguri Jinja Shrine’s location.