Kofukuji Temple is a Buddhist temple on the east side of the Sumida River. This temple belongs to the Obaku Zen school of Buddhism, which is one of the three main schools of Zen in Japan. This particular school of Zen was founded in the early Edo era by a Chinese monk named Ingen Ryuki (1592-1673), so it has a relatively short history in Japan, and Obaku Zen temples still show a strong Chinese influence in their architecture. 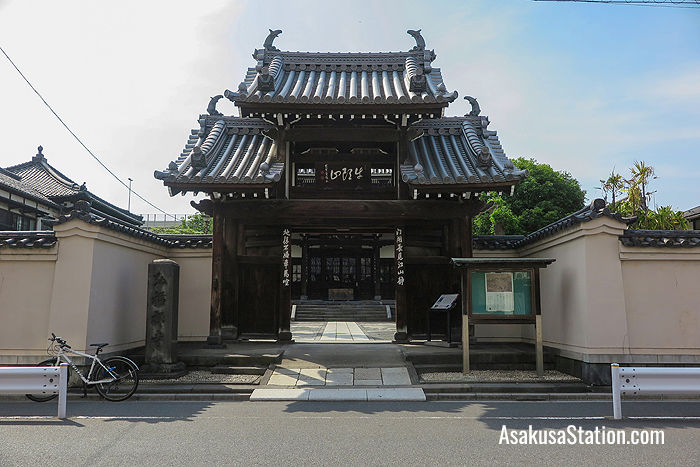 The Sanmon or main gate of Kofukuji Temple

Kofukuji Temple was founded in 1673 and it was given the full name of Gozusan Kofukuji. Gozusan is reference to Gozu-Tenno, which is another name for the Shinto god Susanoo who is worshipped at nearby Ushijima Jinja Shrine. Kofukuji means “temple of wide fortune,” the idea being to spread happiness to all living beings. The main object of worship in this temple is an image of Shaka Nyorai, which is another name for the historical Buddha. However, Hotei, the god of good fortune is also enshrined here as one of the Seven Lucky Gods. 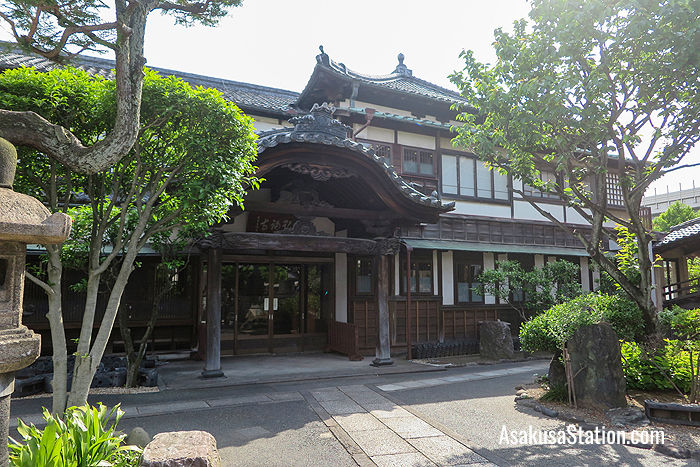 The temple’s guest house dates from 1933

Originally this temple had seven buildings, but they were lost in the many fires and disasters that occurred over the temple’s history, including the Great Kanto Earthquake of 1923. The temple buildings that now stand here were all rebuilt in 1933. The current main building, bell tower, and entrance gate all show a Chinese style of architecture which is typical of Obaku Zen temples. 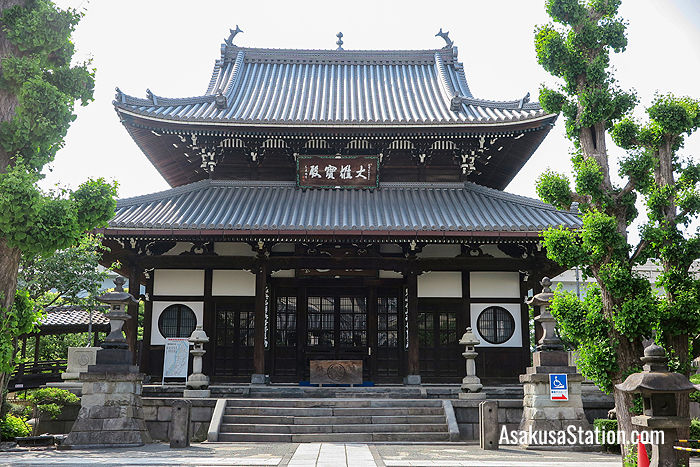 The main hall of the temple

The main hall has a curved hip-and-gable style roof with wooden roof tiles. The round windows on either side of the main building are an unusual feature that is not seen in many other temples. The curved roof, round windows and wooden framing give this building a strong resemblance to the main hall of Mampukuji Temple in Kyoto, which is the head temple of Obaku Zen. 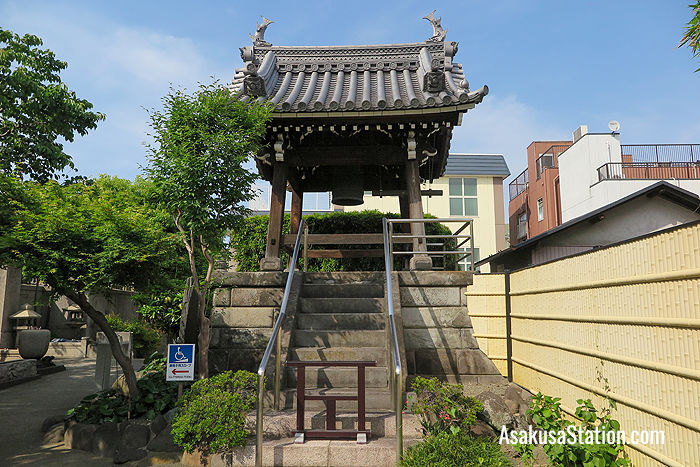 The copper bell of Kofukuji Temple was made in 1688, but the original bell tower was destroyed in the Great Ansei Earthquake of 1855. The current bell tower is a reconstruction built in 1933. 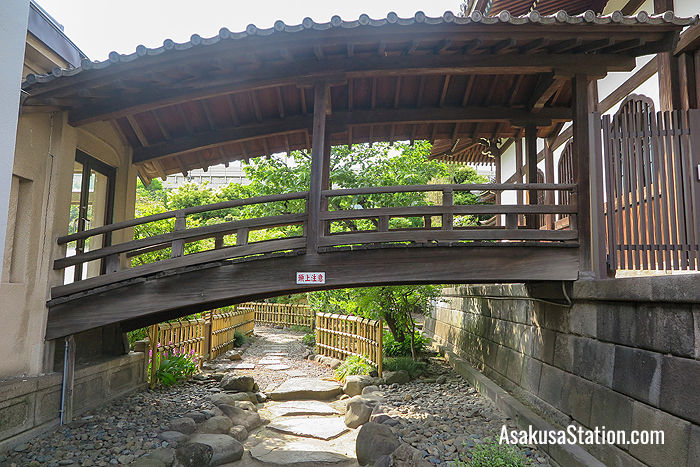 Between the main hall and the guest house is a wooden walkway that joins the two buildings. If you go under the walkway, you will find a garden with a small teahouse at the back of the temple grounds. 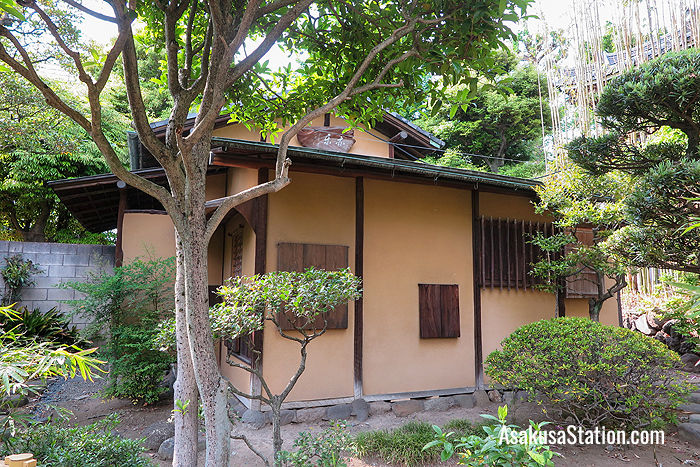 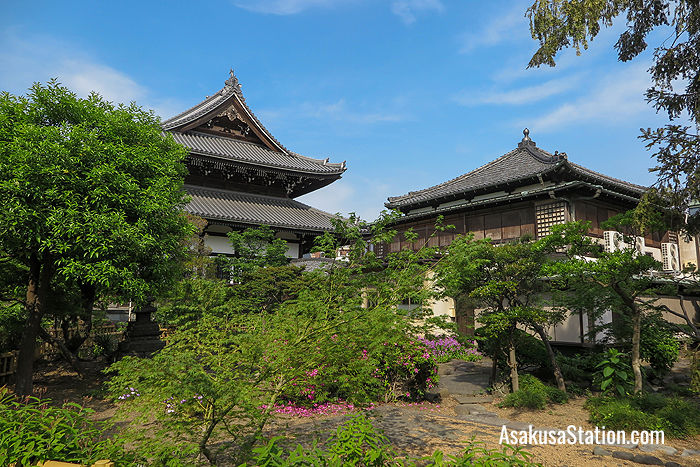 A view from the garden

Kofukuji Temple is located on the east side of the Sumida River. It is a 19 minute walk from the Tobu, Toei, and Tokyo Metro Asakusa stations, a 14 minute walk from Tokyo Skytree Station, or 15 minutes from Oshiage Station. 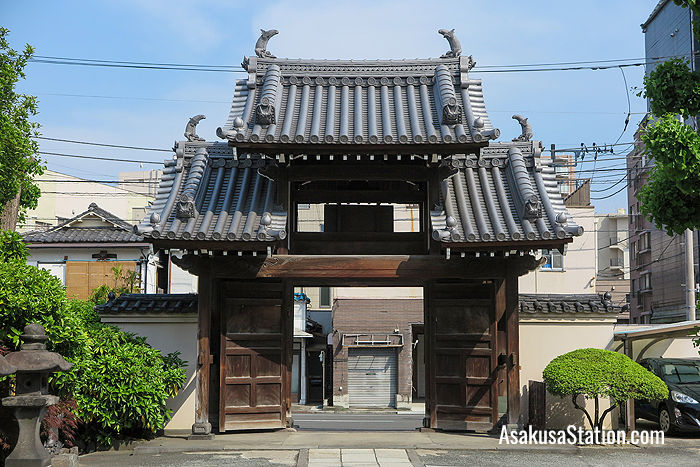 A view of the Sanmon gate from inside the temple

A visit to Kofukuji can be combined with a visit to the Sumida Heritage Museum which is a 6 minute walk to the south, or if you cross the river at nearby Sakurabashi Bridge, both Imado Jinja Shrine and Honryuin Temple are just a 10 minute walk away.