Imado Jinja is a Shinto shrine in the Imado area of Asakusa. Originally dedicated to the god of war, this shrine is now associated with good relationships. In recent years it has also become popular because of its association with “maneki neko” lucky ceramic cats. 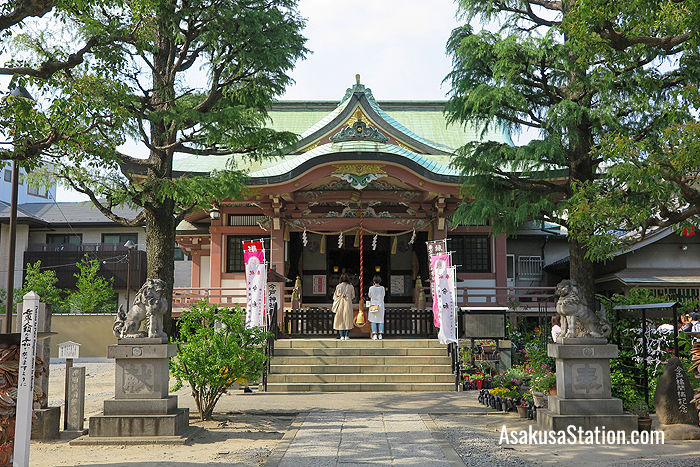 Imado Jinja is associated with lucky cats and good relationships

The shrine’s origins go back to the 11th century when a great samurai warrior called Minamoto no Yoshiie visited this area. Yoshiie came here in 1063 and again in 1081 to celebrate his victories in battle. Yoshiie prayed at this location to give thanks to Hachiman, the god of war, so this shrine was originally called Imado Hachiman Jinja. However, in 1937 it was amalgamated with another neighboring shrine and the name was changed to Imado Jinja. Today the shrine is dedicated to three gods: Izanagi, Izanami, and Fukurokuju, and also the deified Emperor Ojin. Izanagi and Izanami are the first married couple in Shinto mythology, and in the Japanese creation story, they are the mother and father of the Japanese islands. Fukurokuju is one of the Seven Lucky Gods, and people pray to him for happiness, wealth, and a long life. 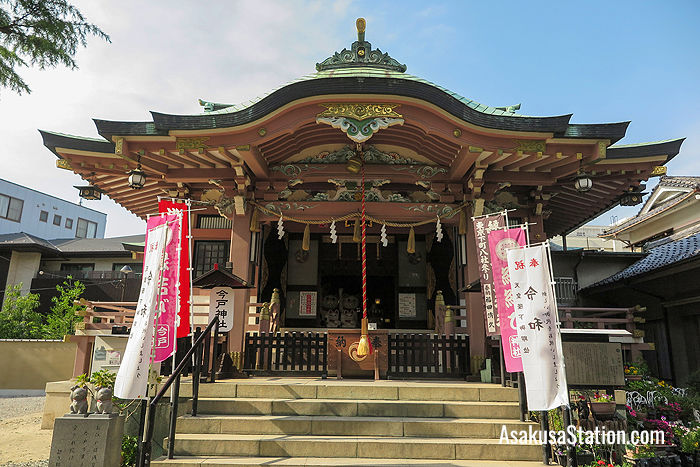 A closer look at the main shrine building

During the Edo era (1603 – 1868) there were many pottery makers in the Imado area. There are not so many potters in Imado now, but the type of ceramic that was made here is still called Imado-yaki pottery. Imado also claims to be the original home of ceramic maneki-neko cats. Probably you have seen these popular figurines which show a cat with one paw raised. The name “maneki-neko” literally means “beckoning cat” and they are often placed at the entrance of a shop or restaurant to welcome the customers. You can also buy them as souvenirs at many souvenir shops around Asakusa, and in Imado Jinja too. 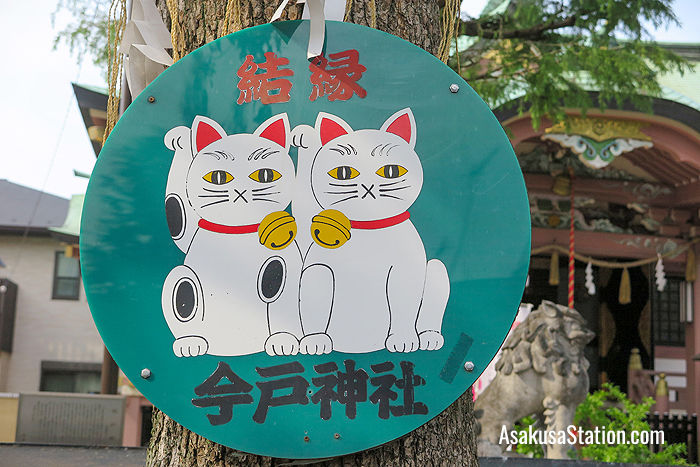 An image of two maneki-neko at Imado Jinja

According to local legend the maneki-neko originated in Imado. In 1852, there was an old woman living in Imado who was so poor that she could no longer feed her pet cat and was forced to let it go. That night the cat appeared to the old lady in a dream and spoke to her. The cat said, “If you make dolls in my image, I will bring you good fortune.” Following the cat’s instructions, the old woman had some cat figurines made from Imado-yaki ware, and went to a shrine to sell them at the gates. The ceramic cats quickly became very popular, and the old woman was saved from poverty. 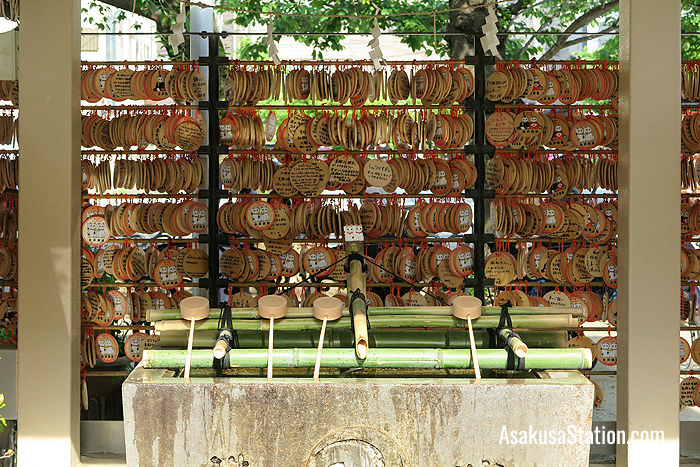 A basin for ritual washing surrounded by ema prayer plaques, at Imado Jinja

Although there are other areas in Tokyo and Kyoto that also claim to be the original home of lucky ceramic cats, Imado Jinja is clearly very proud of the local tradition, as there are cat images all over the shrine grounds. There are even some large maneki-neko statues inside the main shrine building. 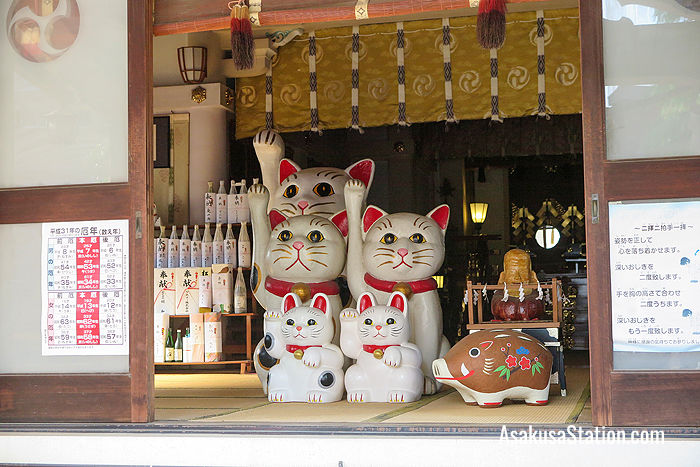 The cats inside the main shrine building

In recent years, Imado Jinja has also gained a reputation as a “matchmaking power spot”. Apparently, if you pray here to the gods Izanagi and Izanami, and ask for a nice wife or husband, you have a very good chance of finding a suitable partner! For this reason you will notice that images of cats at Imado Jinja usually come in pairs. Around the shrine you will also see a lot of ema, or wooden prayer plaques. People write their wishes on these and hang them up to make their dreams come true. Many of these ema are decorated with paired cats. You can also buy ema here, write your own wish and hang it with the others. If your wish is romantic, you might just get lucky! Paired maneki-neko figurines and other cat-themed souvenirs are also available at the shrine shop. 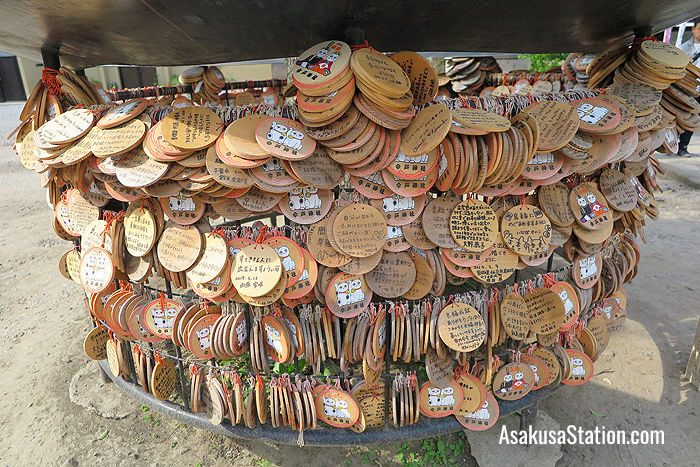 The Imado area is located in the north-east of Asakusa. Imado Jinja is a 13 minute walk north from the Tokyo Metro, Toei, and Tobu Asakusa stations. A visit to Imado Jinja can be easily combined with a visit to Honryuin Temple which is just a 3 minute walk to the south. Here is a map showing Imado Jinja’s location.