Surprisingly few people who visit Asakusa are aware that just to the west of the bustling street market of Nakamise there is a large, tranquil garden with beautiful scenery called Denboin Teien. This garden is an island of calm in the middle of Asakusa, and as it is usually only open to the public once a year, viewing it is a very rare and special experience indeed. 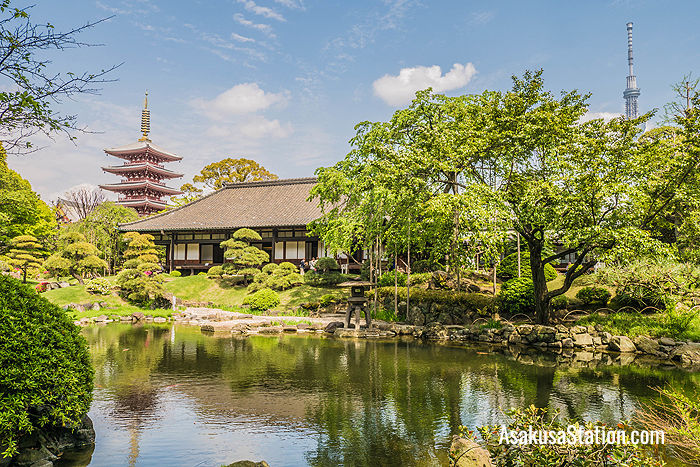 Denboin is the official residence of the abbot of Sensoji Temple and Denboin Teien is the abbot’s private garden. The Denboin residence consists of six main structures which have been nationally designated as Important Cultural Properties.

The current main reception hall is a training center for Buddhist monks and also hosts various rites and rituals throughout the year. This reception hall was built in 1776, and the main entrance was completed in 1777, with other structures, such as the lecture halls, library and kitchen, being added in the 19th and 20th centuries. However, the abbot’s residence was first established here in the early years of the Edo period (1603 – 1868) long before any of the present structures were built.

The garden of Denboin also predates the current buildings and is believed to have been created sometime between 1624 and 1644. It is said that the garden was designed by Kobori Enshu (1579 – 1647) who was a well-known 17th century artist, poet, and tea ceremony master – as well as a highly respected landscape architect! Today the garden is a nationally designated Place of Scenic Beauty.

The garden of Denboin Teien covers 12,000 square meters and is a traditional Japanese stroll garden centered on a pond. At Denboin the pond is actually divided into two large northern and southern ponds which are connected by a narrow channel. Visitors walking around the garden are presented with an ever-changing landscape of fresh green pines and verdant lawns dotted with stone bridges and lanterns. The best view of the garden is across the pond towards the large lecture hall with Sensoji’s five-storey pagoda in the background. This view is particularly beautiful when the large weeping cherry tree beside the large lecture hall is in bloom in early April. From another angle Tokyo Skytree is also visible as part of the contemporary borrowed landscape.

Also in the garden is an ancient stone coffin of volcanic tuff rock which was discovered in the area behind Sensoji during an archaeological dig in 1869. The coffin dates from the Kofun era (300 to 538 AD) and is believed to indicate the presence of a powerful warrior clan in this area at that time.

Although public access to the garden is limited to the spring, this is definitely an improvement on times past. Up until the late 19th century only monks and nobles got to see it!

Unfortunately the Denboin buildings are rarely opened to the public, except for irregular “special openings”. However, in recent years the garden has been opened each spring for a limited period between mid-March and early May. This opening usually includes an exhibition of some of the treasured artworks of Denboin in a special gallery. In 2019 this spring opening was cancelled due to construction work, but hopefully the garden will open again as usual in the spring of 2020.

During the garden’s most recent public opening (2018) it was open from 10.00 to 16.30 with last entry at 16.00 and the entry fee was 300 yen. Exact details of the garden’s opening and its current entry fee should be posted each year on the official website of Sensoji Temple. However, this website is only available in Japanese. Even so, if you happen to be in Asakusa in early spring, it is definitely worth a short stroll from the west side of Nakamise to see if the garden is open. Here is a map showing its location.

Article by Michael Lambe. Photo by torasun/pixta. All rights reserved.