Asakusa Jinja Shrine, is a shrine of the native Japanese Shinto religion, which is located very close to the famous Buddhist temple of Sensoji. The shrine is much smaller than its grand neighbor, and compared with the bustling crowds at Sensoji, the shrine’s grounds are much more peaceful. However, because of this shrine’s long historical and local significance it is nationally designated as an Important Cultural Property. The shrine buildings are also some of the oldest in Tokyo, and are beautifully decorated. 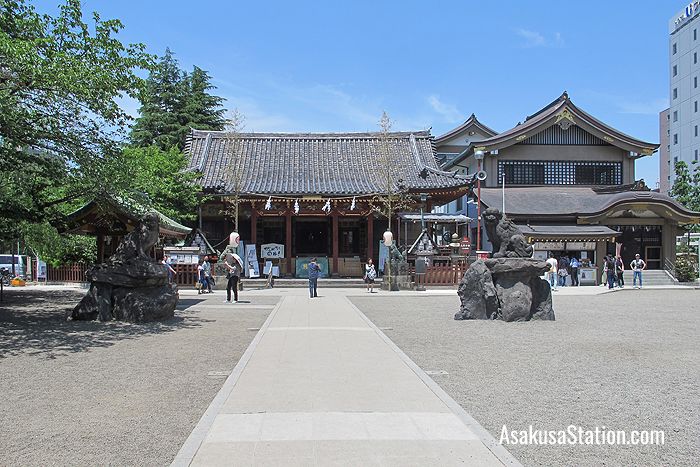 The grounds of Asakusa Jinja

Actually, the shrine and the temple are not close neighbors by accident. In fact the history of Asakusa Jinja is closely connected to that of Sensoji Temple. It might seem strange that a Shinto shrine and a Buddhist temple should have such a close relationship. However, these two religions do not exclude each other’s beliefs and historically they were very closely connected.

The History of Asakusa Jinja

According to legend, two brothers were out fishing one day in 628, when they found a golden statue tangled up in their nets. It was a statue of Kannon, the Buddhist goddess of compassion. Together with a local landowner, the brothers were inspired by the statue to build a small temple, and this was the origin of the great temple of Sensoji that we know today.

The brothers’ names were Hinokuma Hamanari and Hinokuma Takenari, and the landowner’s name was Haji no Matsuchi. Over time the temple that they built became a major center of pilgrimage and brought much prosperity to Asakusa. Asakusa Jinja was founded to honor these three men, and their spirits are enshrined here as local Shinto gods. The shrine is also known as Sanja-sama which means Shrine of the Three Gods. And the major festival held every May here in Asakusa is also called Sanja Matsuri to honor the same three men.

It is not clear when the shrine was first established, but it is believed it was sometime around the late 12th century. The current shrine dates from 1649 when it was built at the command of the shogun Tokugawa Iemitsu. Incredibly, the shrine survived repeated neighborhood fires, the Great Kanto Earthquake of 1923, and the firebombing of 1945 that destroyed most of Asakusa (including Sensoji). This makes the shrine buildings some of the oldest structures in Tokyo. 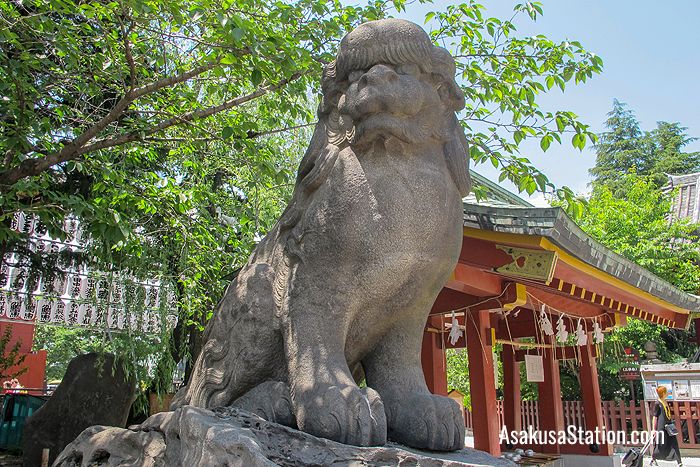 A pair of komainu or lion-dogs, guard the path to the shrine and keep away evil spirits. These komainu are often found at Shinto shrines. Typically, one has an open mouth, and the other has a closed mouth. This is believed to represent the beginning and end of all things. 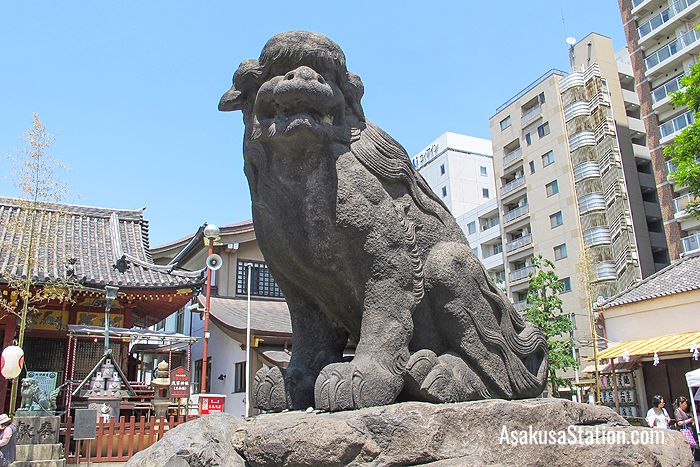 Unusually, this shrine has two more komainu statues which are kept together under the shelter of a parasol. These are called Meoto Komainu which means “Married Lion-dogs” and they date from early in the Edo period (1603 – 1868). Because they are huddled together, people pray to them for a happy marriage and for success in love. 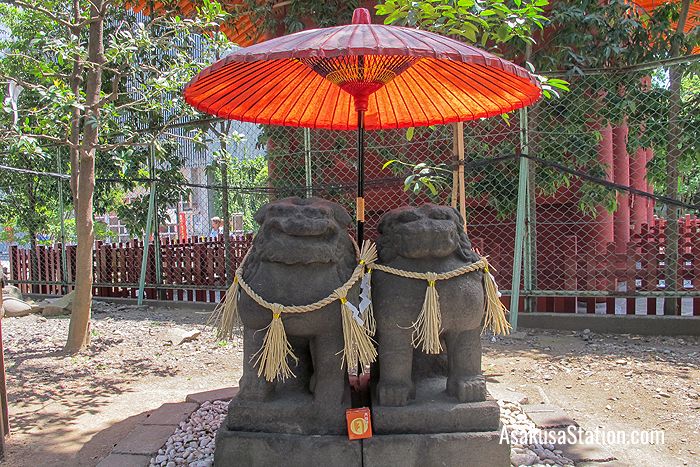 The Married Komainu are very special and precious statues

The shrine’s worship hall is beautifully decorated with fabulous beasts such as dragons, kirin, and phoenix. These sacred animals represent happiness and peace. 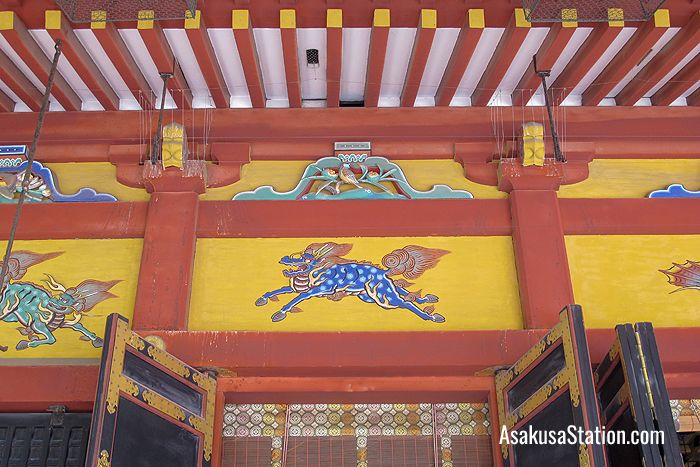 A painting of a kirin, a mythical animal similar to a unicorn, on the shrine’s worship hall

Also on the grounds is a memorial poem stone to the popular writer, Kawaguchi Matsutaro (1899 – 1985). He was born into a poor family in Asakusa, but found major success as a writer of historical and romantic novels and many of his stories became movies and TV shows. 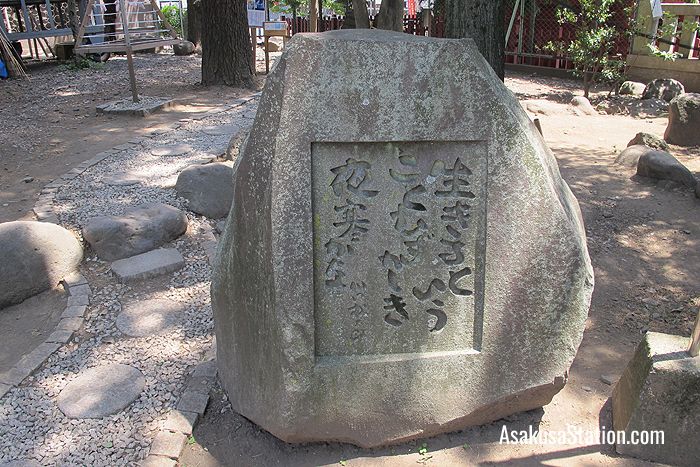 The poem stone of Kawaguchi Matsutaro

The poem is a haiku which reads:

to live
is a difficult thing –
how cold the night is!

Visitors to the shrine buy wooden ema plaques and write on them their prayers and wishes. They then leave the ema hanging at the shrine. Typical things to pray for include good health, safe travel, a happy family, or for success in business or study. By leaving their hopes and dreams here, people hope that the gods will protect them and help their dreams come true. 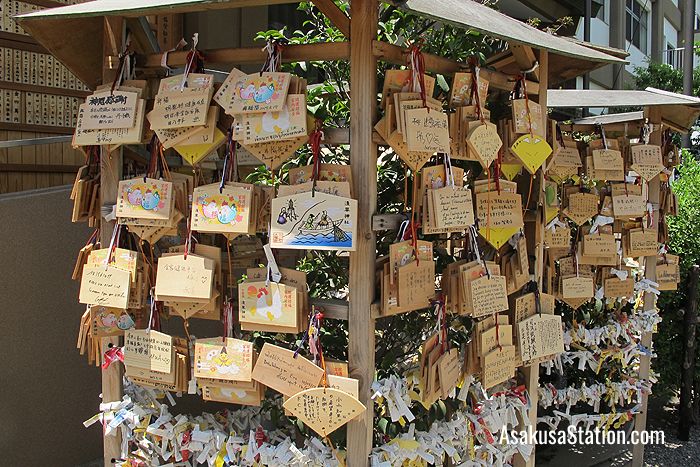 These ema plaques carry peoples’ hopes and dreams to the gods