Asakusa Engei Hall is one of only four traditional yose comedy theaters in Tokyo. These theaters are mainly dedicated to the art of rakugo, a type of comedic storytelling. The Asakusa Engeii Hall theater is a survivor from a time when Asakusa was a major entertainment district full of playhouses and movie theaters. The building was originally the site of a striptease theater built in 1951, but Asakusa Engei Hall was opened here as a comedy performance theater in 1964. Since that time, two local rakugo associations have taken turns performing here, alternating their performances every ten days. Rakugo is performed here every day, during the day and in the evening, 365 days a year. 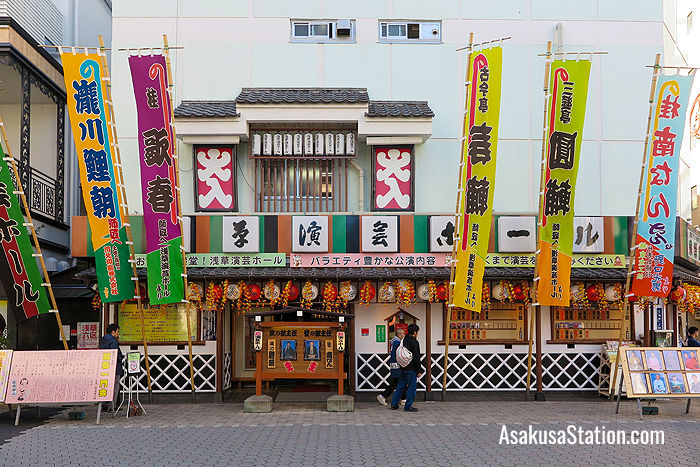 In addition to rakugo, other variety acts performed here include manzai which is a type of stand-up comedy double act, lion dances, conjuring tricks, cut paper silhouette shows, mimicry, juggling, acrobatics, and occasional musical performances. The performance program for each day is on display outside the theater with photographs of the performers. Notably, the famous movie director and actor, “Beat” Takeshi Kitano, first made his name at this theater as part of a comedy double act called the “Two Beats”.

Rakugo performances are given by a single storyteller who performs all the voices of the characters in the story as well as the narration. The storyteller wears a traditional kimono, and kneels on the stage in front of the audience using only a folding fan and small hand towel as props. Much of the skill of the storyteller comes from their animated expressions and gestures. Rakugo storytelling became popular in the Edo era (1603 – 1868), so many of the stories performed are classic tales from that period. However, performers also tell their own original stories.

All of the rakugo performances at Asakusa Engei Hall are in the Japanese language, so you will need to be quite fluent in Japanese in order to understand them. However, even without fluent Japanese, you may still be able to enjoy some of the other variety acts that are performed here. 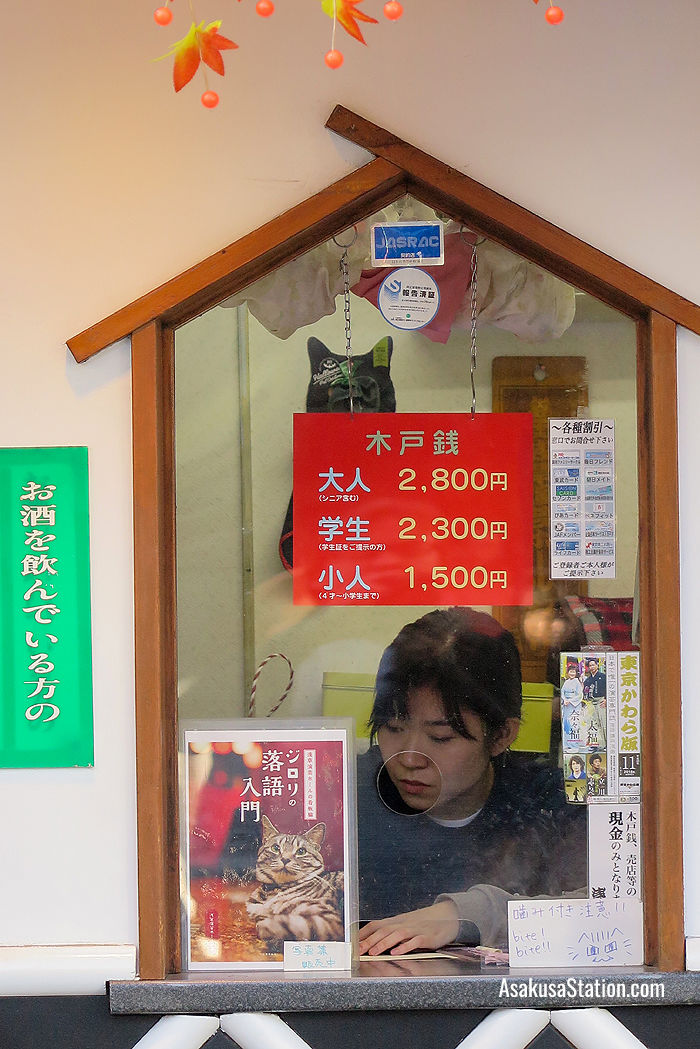 This theater usually does not take reservations. Tickets can be bought on the day of the performance at the ticket office and all seats are unreserved. The ticket office opens at 11.00. Once you have bought a ticket, you can enter and leave the theater at any time. Entering and leaving during the intermission between different performances is preferred, but you can also enter and exit during a performance if you do so quietly.

Day-time performances are from 11.40 to 16.30 and evening performances are from 16.40 to 21.00. The full performance program will include several rakugo performances by different storytellers as well as a number of variety acts. The full performance schedule for each day is on the Asakusa Engei Hall website, and also on display outside the theater, so you can choose which part of the show you would like to see and attend at that time. The entry fee, however, will be the same no matter how long you stay. The normal ticket price is 2,800 yen for adults, 2,300 yen for students, and 1,500 yen for children. However, the price may be slightly higher for special performances, and there are also discounts if you enter after 18.00 (500 yen off) and 19.00 (1,000 yen off).

Drinks (including some alcoholic beverages), snacks, bento lunch boxes, and souvenirs are on sale from a small counter inside the entrance. Audience members can freely eat and drink while watching the show.

For more details and to see the current schedule please check the Asakusa Engei Hall website. As the website is only available in Japanese, you may need a Japanese friend or tourist guide to help you read it.

Asakusa Engei Hall is located in the Rokku district of Asakusa on the west side of Sensoji Temple. It is a 1 minute walk from TX Asakusa Station on the Tsukuba Express Line, and about 7-10 minutes from the Tobu, Tokyo Metro, and Toei Asakusa stations. Here is a map of the location.