If you walk the short distance between Asahi Beer Hall and Sumida Park on the east side of the Sumida River you will see a large bronze statue of a handsome young samurai with one hand pointing ahead. This statue is a tribute to Katsu Kaishu, a great 19th century statesman and peacemaker, who is remembered as the founder of Japan’s modern navy, and as the man who saved Tokyo from destruction in a civil war. Sometimes called “the shogun’s last samurai”, Katsu was born in the Sumida area, so he really is a local hero. 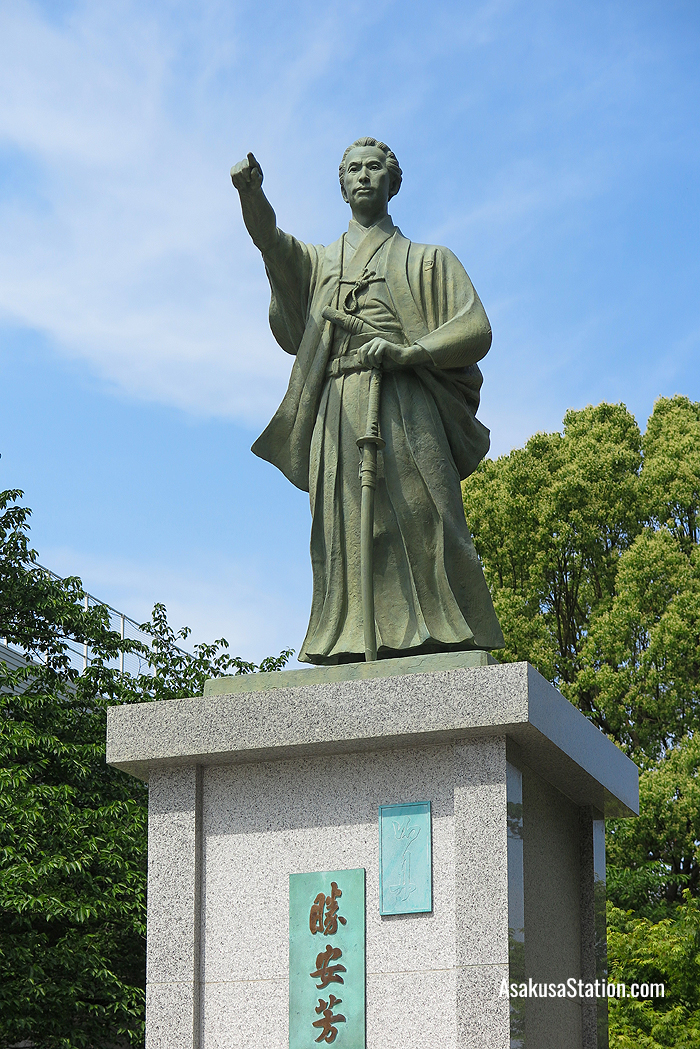 The statue of Katsu Kaishu

Katsu Kaishu was born in Sumida ward’s Honjo district on January 30th 1823. Although he was born into a low-ranking samurai family, he would become a very important figure during a period of great change. For over 220 years Japan had been isolated from the world by an official government policy that kept foreigners from visiting Japan and Japanese people from leaving. But in 1853 this policy ended when the American navy forced Japan to open to overseas trade. Katsu Kaishu, who was a keen student of foreign culture, advised the government to build a modern navy so that Japan could defend itself from outside aggression. In 1860 Katsu was captain of the Kanrin Maru warship; Japan’s first ship to use steam driven propellers, and with this ship he escorted Japan’s first embassy to America. Later, as director of Kobe Naval School, Katsu lead reform in Japan’s navy, and trained a new generation of naval officers. 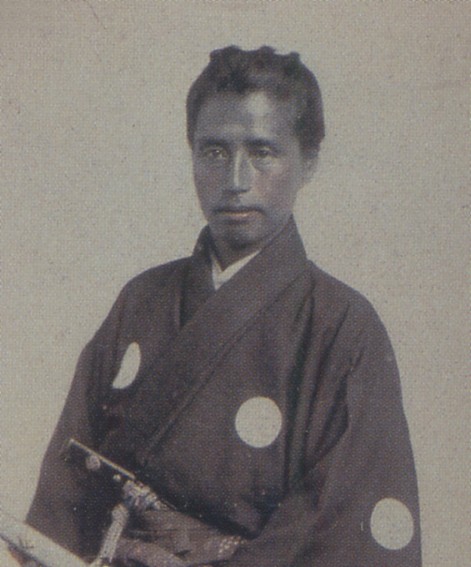 Katsu Kaishu in San Francisco, 1860; this image is Public Domain

During the period 1853 to 1868 Japan went through a great struggle between two political groups. One group supported the shogunate; a military government headed by a member of the Tokugawa family that had ruled Japan since 1603. The other group were revolutionaries who wanted the shogunate removed and the emperor restored as head of government. Katsu was loyal to the shogunate, but he was friendly with both political groups and was opposed to war. He himself was a skilled swordsman, but it is said that he never drew his sword in a fight, even when he was attacked.

The Kanrin Maru – the first Japanese ship to sail to America; this image is Public Domain 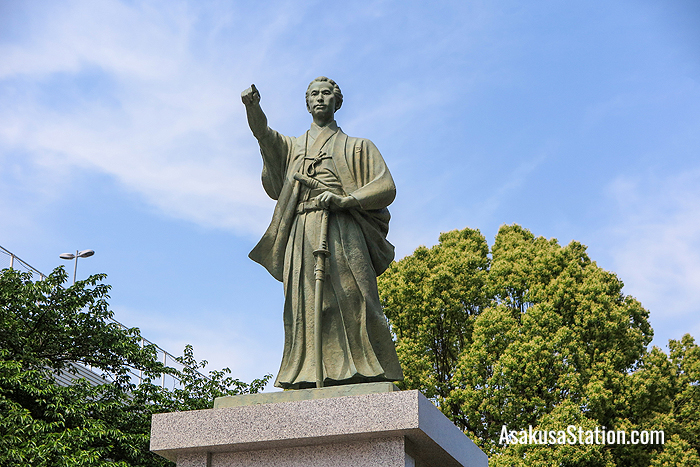 The statue of Katsu Kaishu in Sumida ward was raised on Marine Day (a national holiday in Japan) on July 21st 2003 to mark the 180th anniversary year of Katsu Kaishu’s birth. In a time of great change, Katsu Kaishu is credited with having the foresight to see what role Japan should take in the world, so it is appropriate that his statue should show him pointing the way forward. A plaque at the base of the statue also pays tribute to him for saving Edo from destruction, which led to peace in Japan and the development of modern Tokyo.

The statue of Katsu Kaishu stands on the east side of the Sumida River and is a 5 minute walk from the Tobu, Toei, and Tokyo Metro Asakusa stations. Here is a map showing its location.